Valentine’s Day is just around the corner and what better way to share the love than with a beautiful timepiece in rose gold? On trend for the past couple of years, everyone from Michelle Obama to Minnie Mouse is falling for this delicate take on gold. One to Watch takes a look at this popular metal and shares some of David’s favourite rose gold timepieces.

Pink is synonymous with romance and over the past couple of years, rose gold has swept through the jewellery market – in 2016 it beat 18-carat white gold as the top choice for engagement rings. In the same year Pantone named Rose Quartz one of its two ‘colours of the year’ alongside a blue hue it called Serenity.

Rose gold – also known as pink gold – is made from a combination of gold and copper, hence the hue. How much pink is determined by the ratio of the two metals – higher carats have a higher gold to copper ration which produce a softer, purer rosiness. As the copper content rises, the gold deepens to a red.

But this isn’t the first time we’ve fallen in love with rose gold. The hue first gained popularity in the 1800s in Imperial Russia, thanks Carl Fabergé – best known for his remarkable Easter eggs created for Alexander III and his son Nicholas II. Consequently it was known as Russian Gold. Cartier helped it gain wider popularity in the 1920s – a decade known for its excess but also its femininity, thanks to the celebrity status of flapper girls, such as Zelda Fitzgerald, Barbara Stanwyck and Clara Bow. And Tiffany & Co. has used rose gold in its jewellery since the 1970s.

Rose gold has also long been a favourite in the watchmaking world – 24 carat gold tends to be too soft for watch cases so it gets mixed with an alloy, like copper, to toughen it up. The typical copper content in an 18ct rose gold case will be about 20% and sometimes silver is mixed in as well to soften the tone further.

Rose gold’s softer tone suits men and women and has a versatility that makes it very wearable as either a day watch or for a special event. It also adds a touch of warmth to the wrist. Here, David shares his five favourite male and female rose gold watches. 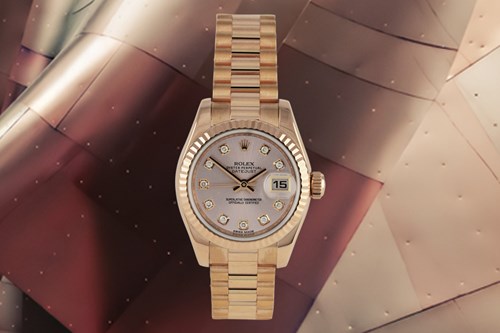 First launched in 1945 to celebrate Rolex’s 40th anniversary, the Datejust was the first self-winding wristwatch that incorporated the date into the dial. More than 60 years later, it is still considered one of Rolex’s most iconic timepieces. Initially only available in gold, the 18 carat rose gold case soon followed, as did feminine options like this one. 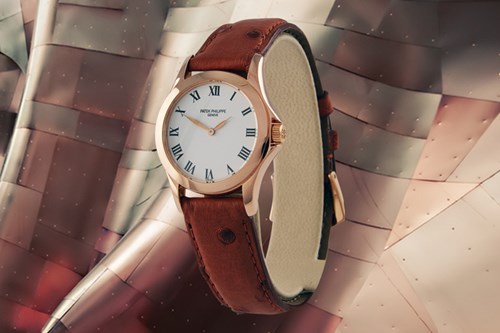 Another timeless classic, Patek’s Calatrava was first introduced in 1932 and its elegant style continues to inspire watch collectors today. Like the Datejust, the Calatrava comes in male and female styles, like this manually wound reference 4905 with 18 carat rose gold casing.

At Baselworld 2017, Patek Philippe pulled out the rose gold stops when it unveiled its Calatrava “Squelette” reference 5180/1R in 18K rose gold. This skeletonised version was launched to mark the 40th anniversary of the manufacture’s calibre 240 and placed the movement front and centre in a design so intricate that it can take an engraver a minimum of 130 hours to complete. 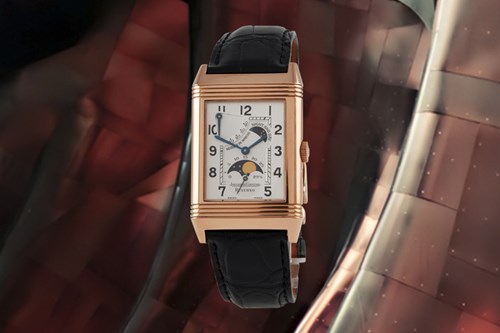 Considered the first sports watch, Jaeger LeCoultre’s Reverso was created in 1931 for polo-playing British officers in India who kept smashing their watches. Eighty six years later, its unique slide and flip mechanism is a firm favourite with collectors and celebrities – Jon Hamm, Leonardo DiCaprio and Eva Mendes have all been seen sporting one. Rose gold has long been a popular metal for this watch and back in 1991, Jaeger-LeCoultre marked the timepiece’s 60th anniversary with an ornate 14 carat rose gold movement. 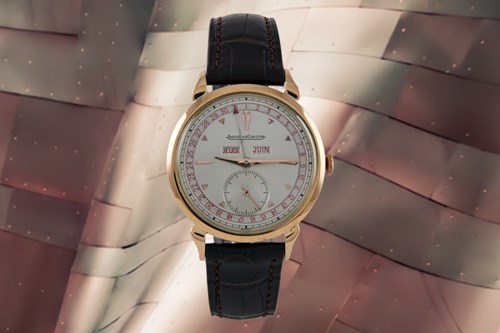 A relative youngster in the watch collecting world, the Master Control was introduced in 1992 and revolutionised the way in which automatic wristwatches were tested. The watch itself was designed with a simple aesthetic – a perfectly balanced dial that allows for easy reading. The attention was unabashedly on functionality and long-term performance. This one is housed in an 18 karat solid rose gold case and features a triple date calendar – the inspiration for the brand’s modern day Master Calendar. 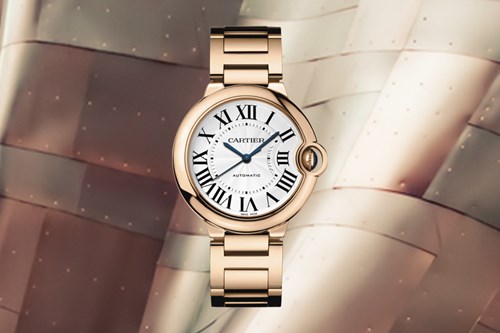 Introduced in 2007, Cartier’s distinctive watch is a firm favourite with men and women alike. Since then, Cartier has unleashed a host of different styles, all featuring its distinctive blue sapphire cabochon crown – the ‘blue balloon’. At least 20 versions incorporate rose gold into the design – either as a detail, as found in 36 mm, 18K pink gold, leather, sapphire, all the way to a full-on pink bonzana in the 36 mm, 18 karat pink gold with diamonds and sapphire.