The 1950s was a decade of immense scientific achievement. Around the world great leaps were being made in electricity, electronics, aeronautics and nuclear research. Russia and the US were locked in the space race and, in Europe, the European Organization for Nuclear Research (CERN) began studying the inside of the atom.

All of which meant that the scientific community was increasingly exposed to magnetic fields. But these fields play havoc with a watch’s accuracy and so, spotting an opportunity, Rolex developed its ground-breaking Milgauss, designed to withstand magnetic fields of up to 1,000 gauss. The watch – like the unit of measurement – was named after German mathematician and physicist Carl Friedrich Gauss – one of the first to study the effect of magnetic fields – and the Latin word ‘mille’ meaning 1,000.

The timepiece was specifically targeted at people who worked in power plants, medical institutions and laboratories. Close in look to the Rolex Submariner, it had a larger than average case and bezel and an Oyster bracelet.

But it was the details that made it unique. Rolex placed the Milgauss movement inside an inner case made of iron, thus protecting it from the effects of a magnetic field. To prove its scientific credentials, the company even had CERN verify its claims. Meanwhile, the Milgauss designers kept openings in the dial and case to a minimum and, for good measure, added in the now iconic lightning bolt seconds hand.

The Milgauss was not a runaway success, though, with relatively low sales throughout the 1960s and 1970s. It received only one major update in the 1960s, with the introduction of a smooth bezel and the loss of the lightning bolt. Eventually, the line was retired completely in 1988.

However, almost 20 years later Rolex relaunched the line, bringing back the lightning bolt, this time in bright orange. For its anniversary model Rolex added a tinted green crystal it calls glace verte, which it claims is so hard to make that it hasn’t bothered to take out a patent. In 2014, it added a blue dial glace verte, called the Z-Blue. This new model also includes Rolex’s calibre 3131 and blue Parachrom hairspring. Thinner than a strand of hair, the mechanism is unaffected by magnetic fields and up to 10 times more resistant to any shocks. 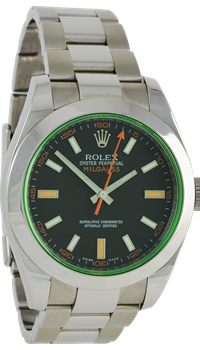 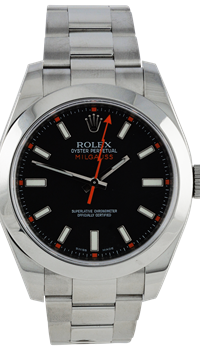 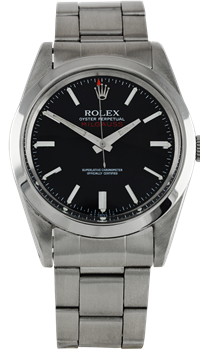