It is impossible to tell the story of this classic timepiece without first telling the story of Louis Cottier. The son of a watchmaker, Cottier grew up to become an extremely talented horologist, winning two prizes from Patek Philippe while still an apprentice, and earning universal acclaim for his mechanisms that allowed a watch to indicate the time in multiple zones around the world.

Cottier’s ‘world time’ system was used by some of the biggest Swiss houses, including Vacheron Constantin, Rolex, and Agassiz and Co. In the mid-1930s, Patek Philippe approached Cottier to create its first world timer – the rectangular ref. 515 HU, soon followed by the ref. 96 HU – contained within the signature Calatrava case. Later, the ref. 1415/1 HU would combine the world time mechanism with Patek’s trademark chronograph complication. In the 1950s Patek Philippe launched the ref. 2523 HU, with around 40 cities on its bezel and a second crown to change time zones.

However, the Heures Universelles series was not an instant hit, which means that there are relatively few timepieces available today. This has made them highly desirable, to the point that they now hold an almost cult status amongst collectors. When one does come up for auction, it tends to sell for big sums of money. For instance, an extremely rare 2523/1, in pink gold, with two crowns and a two-tone dial was sold by Phillips auction house in 2016 for around £2 million.

Patek Philippe’s world time watches are also known for their beautiful enamel maps, and dials with mythical creatures and symbols. Over the years the choice of cities has changed, often reflecting the political and cultural climate of the time in which the watch was made. The most recent came at Baselworld 2016 when Patek Philippe unveiled its new ref. 5230 with a brand new world timer to reflect a number of shifts, including the fact that Dubai has replaced Riyadh as the internationally recognised representative city of its time zone. 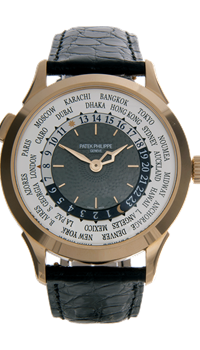 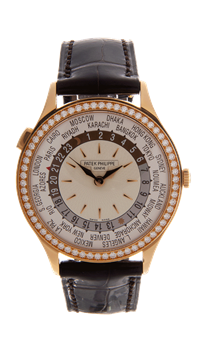 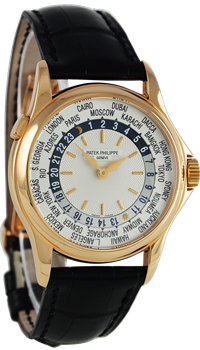 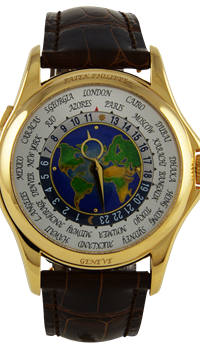 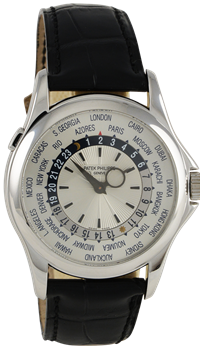