Meteorite dials: a watch that’s out of this world

Since the dawn of time, people have looked to the heavens in wonder. And then, on 20 July 1969, we stopped wondering and landed two men on the moon. It was an extraordinary feat of human endeavour – the technology in the average car today is greater than that in Apollo 1. Fifty years on, the achievement remains a source of fascination, particularly as commercial space travel could soon be reality.

But, if you don’t have a spare quarter of a million dollars to fund a space flight (or the bottle to brave the g-forces), you can still own something that’s truly ‘out of this world’. Featuring cosmic rock that dates back millennia, meteorite dial watches are the perfect marriage of time and space. Here’s everything you need to know about these unique timepieces, starting with some background on their celestial source material.

What is a meteorite?

A meteorite is a solid piece of debris from an object, such as a comet, asteroid, or meteoroid, that originates in outer space and survives its passage through the atmosphere to reach the surface of a planet or moon. It is composed of iron and nickel and makes an ideal material for watch dials because of its density and hardness.

The oldest meteorites on Earth

Meteorites range in age. The oldest particles, calcium-aluminium-rich inclusions from carbonaceous chondrites, have been dated at 4.56 billion years old. The oldest impact crater on Earth is also the largest. Scientists estimate that the Vredefort crater in South Africa was originally 185 miles across. A meteorite or asteroid bigger than Table Mountain blasted out the giant crater 2.02 billion years ago.

How often do meteorites hit Earth?

To date, there have been almost 1,100 recovered falls (meteorites that were witnessed falling) and almost 40,000 finds (found, but not seen to fall). It is estimated that about 500 meteorites reach the surface of the Earth every year, but fewer than 10 are actually recovered, as most fall into the sea. One of the finest collections of meteorites is housed at the Natural History Museum in London. The collection contains around 2,000 individual meteorites, in about approximately 5,000 registered pieces. It includes a unique Martian meteorite with the deeply unromantic name NWA7533.

Throughout history, humans have used meteorites to make everything from tools and weapons to cultural objects and jewellery. Meteorites were even found in objects from Tutankhamun’s tomb. However, their use in watches is a more recent phenomenon.

Meteorites are named after the places where they are found, and there are two that the watch industry favours: Gibeon and Muonionalusta. Gibeon, believed to have fallen to Earth in prehistoric times, was found in Namibia, while Muonionalusta, found in Sweden in 1906, is estimated to be about one million years old.

These iron-nickel-based meteorites are popular for use in watch dials because they exhibit prominent Widmanstätten structures – typical striations and patterns that become evident once the material is subjected to a chemical bath. These striations are named after Count Alois von Beckh Widmanstätten, director of the Imperial Porcelain works in Vienna in 1808, who found that by heating iron meteorites he could influence and augment the natural colour and lustre of the repeating patterns found in the iron and nickel. The structures themselves are created by the extreme temperature changes that the meteorite undergoes upon entering the Earth’s atmosphere.

Rolex was the first manufacturer to use slices of meteorite to develop these unique dials, originally featuring them in the Daytona and the Day-Date models. Meteorite dials can now also be found on premium versions of the Datejust, Pearlmaster and GMT-Master II. Like Rolex, Omega used Gibeon material for its Speedmaster Grey Side of the Moon watch, launched in 2014. This was a fitting choice since the Speedmaster was worn by the Apollo 11 astronauts when they landed on the moon in 1969 and is NASA’s official watch. 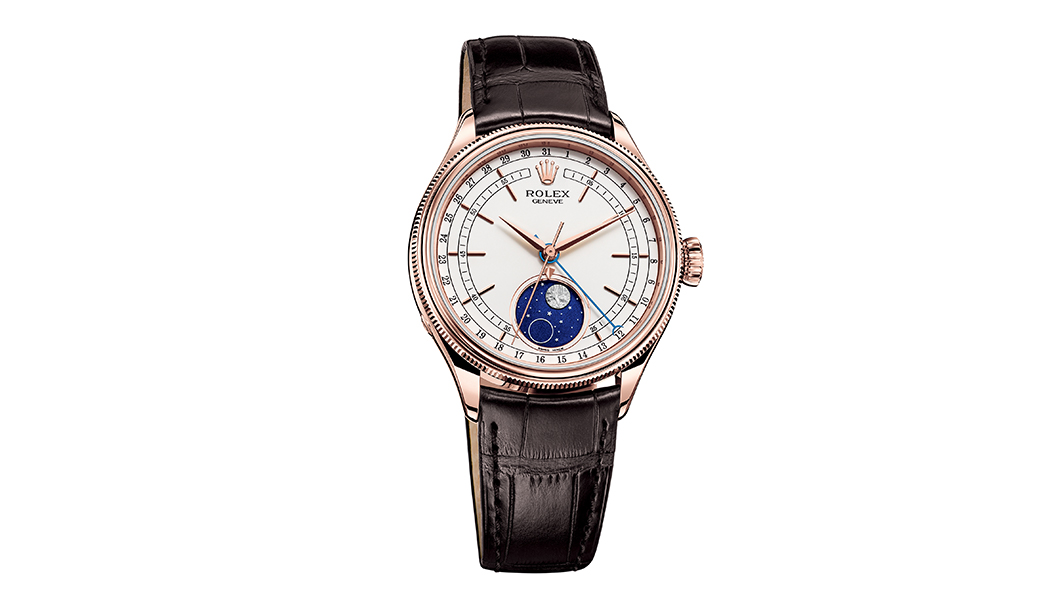 How are the dials made?

Cutting and finishing a meteorite dial requires time and skill. In the Rolex, for example, each dial is made from a solid slice of the Gibeon meteorite, which is then attached to the surface of the dial and treated with an acid-wash finish to bring out its natural crystalline pattern. The once-dull metal is almost unrecognisable after hours of careful polishing and finishing that amplifies the unique texture and pattern of the meteorite. The angle of the pattern on the dial depends upon which plane the raw meteorite was cut.

Meteorites can be tricky to handle

Meteorites are very difficult to work with, mostly because the material is rigid and brittle, and the dials often break in production. Most dials are secured via a baseplate beneath the meteorite slab to offer stability. The material is magnetic, so it has to be rhodium-plated for use in watches.

No one else has a meteorite dial like yours

Since the unique pattern seen on meteorite dials occurs naturally, it will vary from one dial to the next, meaning no two will ever appear exactly the same. Slicing through the metal striations reveals centuries of pressure, heating and cooling, making each dial unique and impossible to synthetically replicate. It’s easy to see why, therefore, these watches are so prized by collectors.

With meteorites being quite literally ‘out of this world’, their use in watch dials is limited, making them one of the great rarities of the horological world. Unsurprisingly, this adds to their value. And, as the Gibeon meteorite is now protected by Namibian law, with no further harvesting of it permitted, manufacturers can only draw on previously procured supplies to create new watches. As a result, they command a high price; many fetch upwards of £20,000 and some considerably more.

Technically a collection of four watches, the Louis Moinet Meteoris comes with a fittingly astronomical price tag of £3.5 million. Named after the celebrated 18th century ‘father of chronograph watches’, the collection features precious stones and meteorite pieces integrated into the dials. In a collaboration with Luc Labenne, the watches have been made using pieces from the moon, a Mars meteorite and an asteroid. The Tourbillon Mars model, for example, includes a fragment of the Jiddat al Harasis 479 meteorite that dates back 180 million years. Martian meteorites can sell for as much as $1,000 (£790) per gram – more than 15 times the price of gold – so it’s no surprise that the collection commands such a high price.

If you’re looking for a watch that’s out of this world, or are in need of some advice on buying or selling a watch, please don’t hesitate to get in touch or visit us at our Burlington Arcade showroom in Mayfair, London. We look forward to seeing you.