With its reputation for building watches with specific functional, and often quite adventurous, purposes (the GMT Master developed for airline pilots; the Daytona the choice of racing drivers), it’s no surprise that Rolex was the first to come out with a timepiece especially for divers.

Launched in 1954, the Rolex Submariner would become the world’s most recognised watch. However, its origins can actually be traced back to 1926, when Rolex introduced the Oyster, the first watch with a hermetically-sealed case, making the mechanism waterproof. 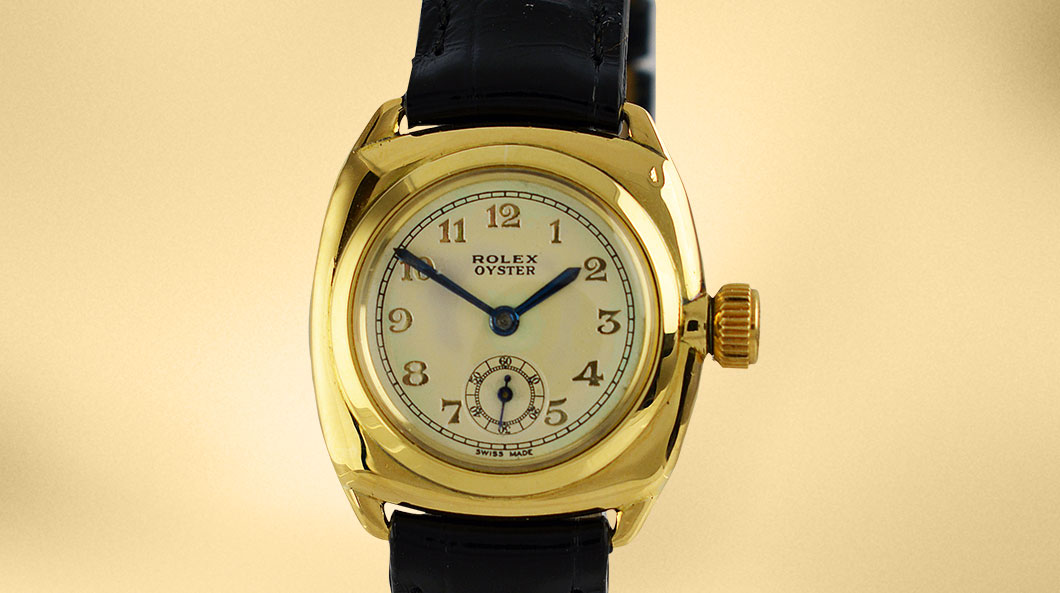 Fast forward a couple of decades to the early ‘50s, when Rolex director and amateur diver Rene Jeanneret convinced the company to produce a watch specifically for scuba divers. To do that, though, the watch would need to withstand greater depths. Rolex immediately began redeveloping and testing its Oyster case. In September 1953, a specially-created model was affixed to the hull of Auguste Piccard’s Bathyscaphe deep-diving submarine when he descended 3,131.8 metres below the ocean. When the Bathyscaphe surfaced, the Rolex still worked perfectly.

By the time the Submariner was officially launched, it had passed rigorous field tests and gained a ringing endorsement from The Institute for Deep Sea Research in Cannes. As well as its ability to work at incredible depths, the watch featured a rotating bezel that allowed divers to keep track of elapsed time while they were submerged.

Rolex had created a professional diver’s watch with an automatic movement and a water resistance of 100 metres, thanks to the screw-down crown system it called Twinlock. Subsequent unique features were specifically created to address the needs of professional divers, including the Submariner’s latching safety clasp with wetsuit extension system. 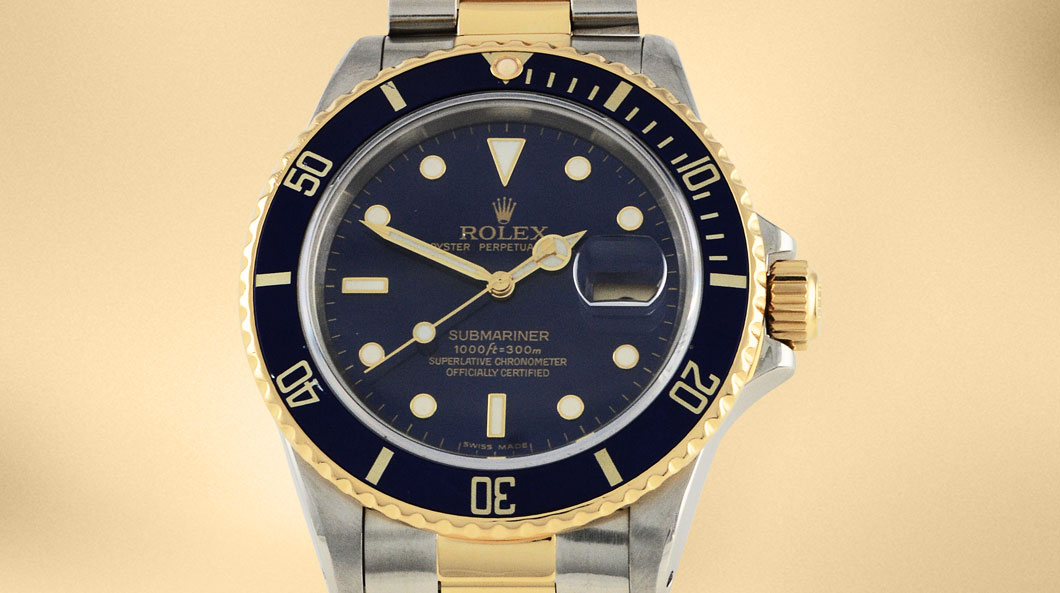 Following its early diving successes, the watch continued to prove its metal when, in 1960, the submarine Trieste descended 10,916 metres into the Mariana Trench, the deepest point in the ocean. Attached to the vessel was a very special Rolex prototype that successfully ‘survived’ pressures of 1,125 kilograms per centimetre during the dive.

Over the decades, the Submariner continued to evolve, with Rolex constantly refining the design while only making minor changes to the watch’s working parts. In 1959, the manufacture increased the case size to 40mm in diameter and added crown guards to provide improved protection for the timepiece’s screw-down winding crown. In 1966, Rolex included a date-display model with the introduction of the Red Submariner reference 1680, a feature that remains an option today.

In the early ’70s, Rolex began releasing alternatives to the standard stainless-steel watch fitted with black dials and bezels. The Submariner was now available in yellow gold and two-tone, with the option of bright blue dials and bezels.

With the introduction of the reference 16800 in 1979, the Submariner included an updated calibre 3035 movement - a ratcheting, unidirectional bezel and a scratch-resistant sapphire crystal (rather than acrylic as on previous models). Thanks to its more robust case, the watch’s depth rating increased to 300 metres.

And, since the late ’80s, Rolex has crafted all its Submariners from 904L stainless steel (now known as ‘Oystersteel’), which is ultra-corrosion-resistant. In 1988, the watch was fitted with the highly accurate and highly durable 31-jewel calibre 3135 movement.

Further design developments have since followed. In 2004, Rolex launched the green bezel (or LV for lunette verde) version of the reference 16610 to commemorate the 50th anniversary of the Submariner. It has since been nicknamed ‘the Kermit’ by its many fans and enthusiasts.

The most recent major update came in 2008, when Rolex completely redesigned the Submariner’s case and bracelet, introducing a solid gold model, and later two-tone and stainless-steel variants. Although the watches retained the same calibre 3135 movement, they received a chunkier case, a ‘Maxi’ dial with larger hour markers, thicker hands, a bracelet with a new clasp and solid centre links, and a bezel insert made from Cerachrom (Rolex’s proprietary scratch-resistant ceramic material). The lugs and crown guards have also been made significantly thicker, giving the watch a bolder appearance.

Despite its various incarnations, the Submariner is very much the same watch Rolex launched 75 years ago and remains the blueprint for many contemporary sports watches. Almost all dive watches today bear its influence. Rugged and sporty, yet sophisticated enough to wear for formal occasions or in the board room, the appeal of this iconic timepiece endures. 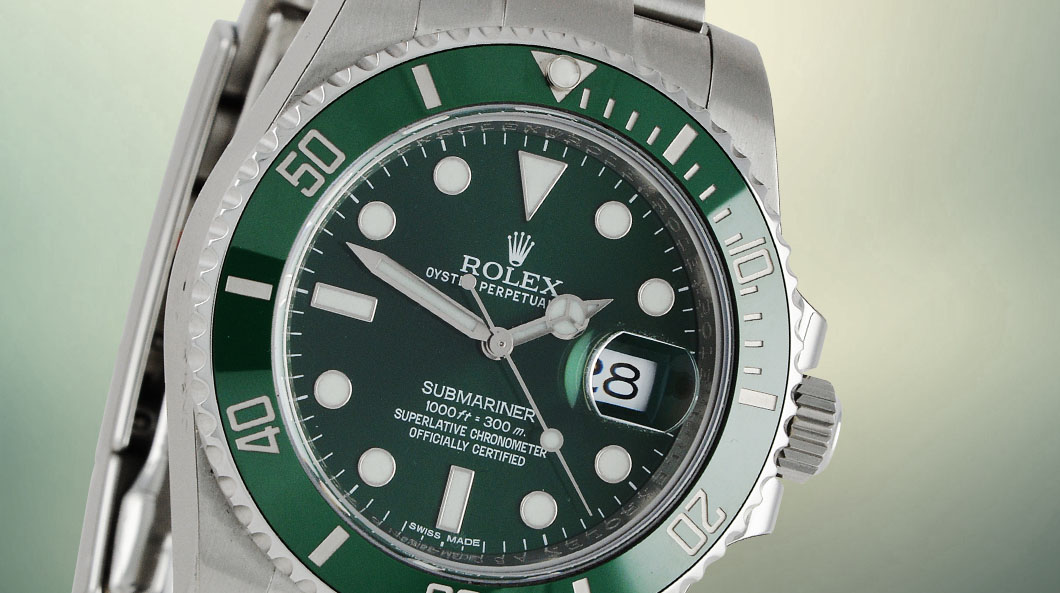 It may have started out as a cult favourite among professional divers, such as Jacques Cousteau, but the Submariner’s reputation as the world’s best watch was secured when, in 1964, James Bond checked the time on his reference 6538 in Goldfinger. The Submariner would go on to feature in another eight Bond films, and even became a life-saving tool in the 1973 blockbuster Live and Let Die, when Roger Moore used the bezel of his reference 5513 (modified by ‘Q’, of course) to cut through some ropes that were holding him hostage. The actual watch, complete with saw-toothed bezel, was auctioned by Phillips in 2015, fetching CHF365,000. Pretty impressive for a watch that no longer worked since the movement had been removed for filming.

The Submariner has had legions of impossibly cool fans since its inception, including Steve McQueen, Robert Redford and Burt Lancaster and it remains a perennial favourite. Contemporary fans include David Beckham and Orlando Bloom, as well as Ellen DeGeneres, who’s often seen wearing a solid white gold reference 116619. Meanwhile, Robert Downey Jnr and Matt Le Blanc prefer the more edgy ‘Hulk’ with its green dial and bezel and larger Chromalight hour markers and hands. For those who want a pop of colour, the two-tone reference 116613, loved by singer Rita Ora, comes in 18k yellow gold with a blue dial and bezel.

Perhaps unsurprisingly, the Submariner has become highly collectible for true aficionados and enjoys one of the best resale values on the preowned market. The most expensive Submariner ever sold – a reference 6538 from 1956, with an incredibly rare ‘Explorer Style’ dial – fetched $1,068,500 at auction in 2018 (and that was without the bezel and bracelet).

We regularly have a variety of Rolex Submariners available in the showroom, so if you’re interested in buying or selling one of these iconic timepieces, please contact David Duggan Watches to make an appointment.