The ultimate chronograph from Rolex, the Cosmograph Daytona was designed for those with a passion for speed and, specifically, to meet the demands of professional racing drivers. Building on 30 years of close association with the world of motor sport – land speed record holder Sir Malcolm Campbell was considered the first ambassador of the brand – Rolex introduced the Cosmograph (meaning ‘measurement of the universe’ in Greek) reference 6239 in 1963. The intention was to complete Rolex’s collection of professional timepieces, which already included the Submariner and the Explorer.

Nicknamed the ‘Daytona’, after the famous Florida International Speedway racetrack for which Rolex was the official timekeeper, it featured a multifaceted face with three chronograph counters – reminiscent of the cockpit of a race car – and a large tachymeter scale on the bezel in a contrasting colour (black or silver) that allowed drivers to accurately time their laps. 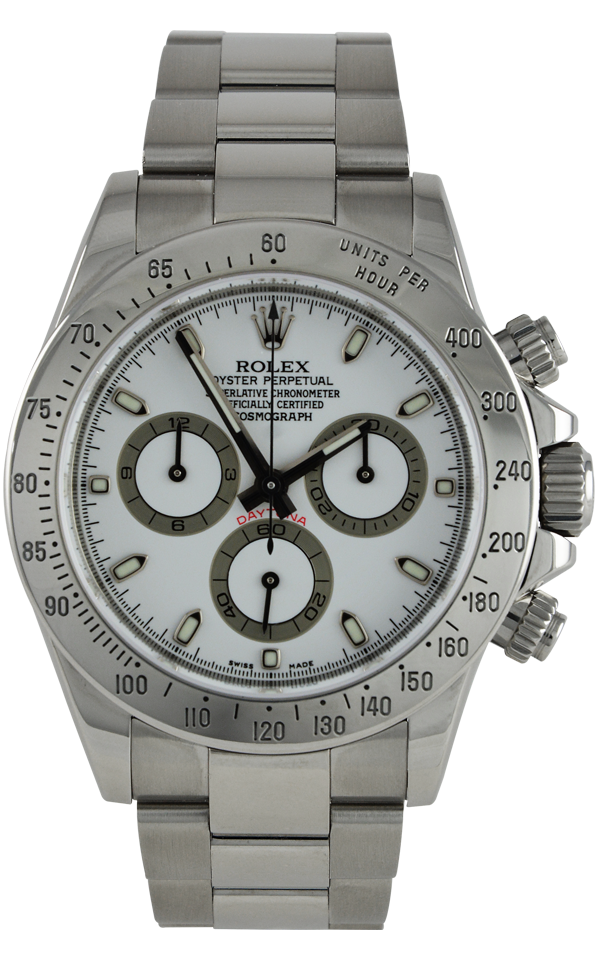 When Rolex released the reference 6240 ‘Oyster’ Cosmograph Daytona in 1965, the watch now had screw-in push buttons that sealed the watch’s case almost as hermetically as its Oyster models without the stopwatch function, making it waterproof. It also featured a black bezel with acrylic inlay. Then, for one year only, in 1970, Rolex produced the reference 6262, which saw the watch return to an engraved steel bezel and unthreaded push buttons. The movement was also modified, with Rolex raising the frequency of its Valjoux calibre from 18,000 to 21,600vph (vibrations per minute).

There followed the reference 6264, in production from 1970 to 1972, which featured the same movement but had a bezel with an acrylic inlay and screw-in push buttons. The last references with hand-wound movements were the 6263 and 6265, which were produced from 1971 to 1988.

The Daytona is perhaps best known for its most famous fan – actor, and highly-successful race car driver, Paul Newman. At the start of his racing career in 1972, his wife, actress Joanne Woodward (with whom he starred in the 1958 film The Long, Hot Summer, pictured below), gave him a reference 6239 with an engraving that read: “Drive slowly, Me”. Newman remained a faithful Daytona wearer till he passed away in 2008 and never raced without one. Such was his association with those early models that collectors dubbed them the ‘Paul Newman’. 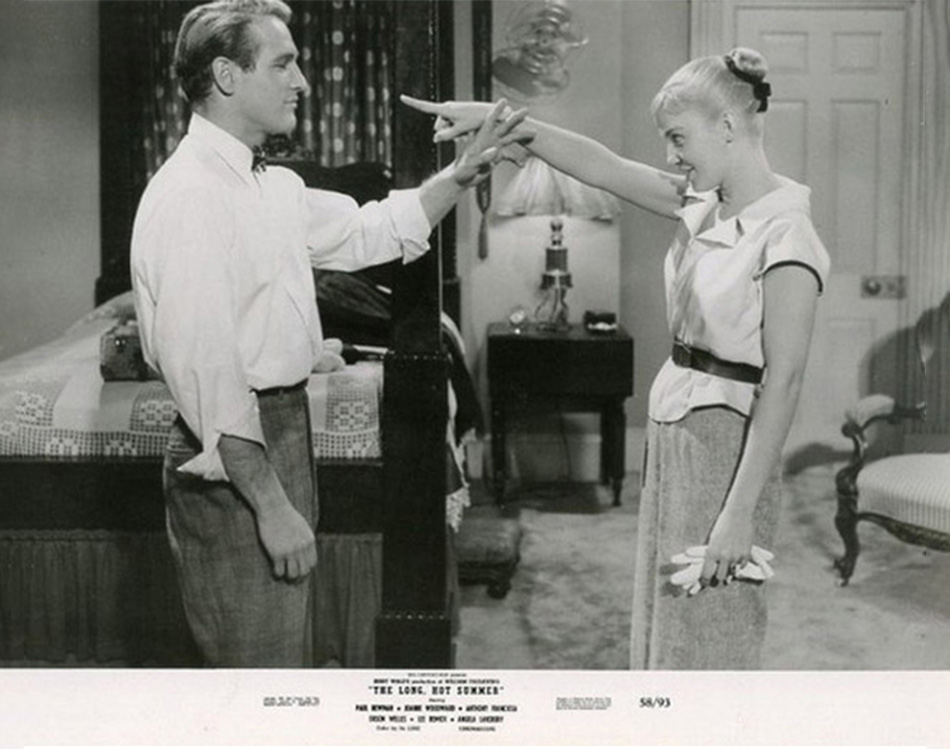 But not everyone fell in love with the Cosmograph and, in the seventies, the Daytona was Rolex’s least popular model. There were even rumours that the brand might halt production. In fact, when Paul Newman gave away his original reference 6239 to his daughter Nell’s boyfriend, James Cox, in 1984, the model was selling for a mere $200. How times change. When it went to auction in 2017, the same watched fetched a staggering $17.75 million, making it the most expensive wristwatch ever sold at the time.

By the late-eighties, sporty chronographs were growing in popularity and the Daytona was back in favour. Indeed, it was not unusual for would-be buyers to wait up to three years for one. In 1988, Rolex introduced the second series of the Daytona (the reference 4030), its first self-winding model, which incorporated a modified Zenith ‘El Primero’ movement. Alterations included slowing the movement’s frequency from 36,000vph to 28,800, which resulted in both a longer power reserve and the need for less frequent servicing.

Rolex offered the model in all-steel and all-yellow gold, later adding steel and gold and white and rose gold variations to the collection. However, all-steel Daytonas in good condition from that period command higher prices than their ‘hybrid’ counterparts on the pre-owned market today. 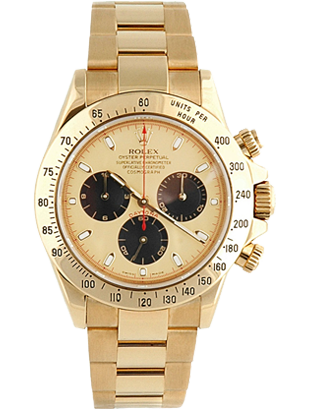 In 2000, Rolex launched the third Cosmograph series with another Daytona first: an in-house movement, the calibre 4130, which is still used in today’s models. It has 44 jewels, a 72-hour power reserve, and Kif shock absorbers for its balance and escape wheel, while vertical coupling assures a smooth start for the elapsed-seconds hand. The change in calibre can be seen on the dial, with the running seconds subdial relocated from 9 o’clock to 6 o’clock and the centres of the elapsed-minutes and running seconds subdials now positioned higher on the dial. For the past decade, it has also featured Rolex’s inhouse blue Parachrom hairspring.

Also in 2000, Rolex released the Daytona Limited Edition that was aimed at women buyers. Nicknamed ‘the beach’, it came in four dial options, featuring turquoise, brimstone and pink and yellow mother of pearl, with matching leather straps.

And, to mark the Daytona’s 50th birthday in 2013, Rolex introduced a platinum version with a brown ceramic bezel. A further variation came in 2016, when a version with the bezel made of cerachrom, Rolex’s proprietary high-tech material, was unveiled at Baselworld by rapper Jay-Z.

Throughout the years, the timepiece has become synonymous with its namesake. Rolex has been the principal sponsor for the 24 Hours of Daytona race since 1991 and every winner receives a Rolex Cosmograph with a special engraving on the case back. Collectors call these rare models the ‘Winner Daytona’.

Daytonas certainly make a wise investment. Owners of the first models with four-digit references are particularly fortunate, as they have seen a phenomenal rise in value over the years. A reference 6263 auctioned by Christie’s in 2013 fetched almost a million Swiss francs. If you’re after an icon, however, it’s worth noting that serious collectors today only consider the rare references 6293 and 6241 as true ‘Paul Newman’ Daytonas. Featuring the so-called ‘exotic dial’  ̶  either white with black sub-dials or, reversely, black with white sub-dials  ̶  they come with a hefty price tag of around $100,000. 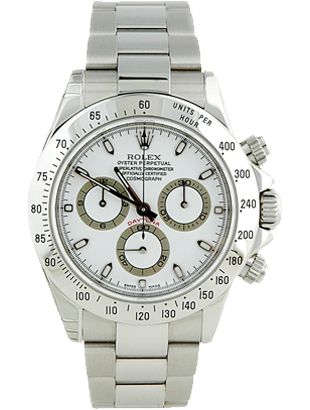 Paul Newman may have been the Daytona’s original poster boy, but it still has a devoted following of famous fans today. Rapper Post Malone, pop star Miley Cyrus, singer John Mayer and comedian Kevin Hart have all been seen wearing the Rainbow Rolex Cosmograph Daytona. Fashion designer and former Spice Girl Victoria Beckham opts for the warm tones of the Everose Gold Daytona, a striking oversized woman’s watch. Meanwhile, Maroon 5 frontman Adam Levine gets the best of both worlds by swapping between his brand-new Rainbow Daytona and vintage Paul Newman model. 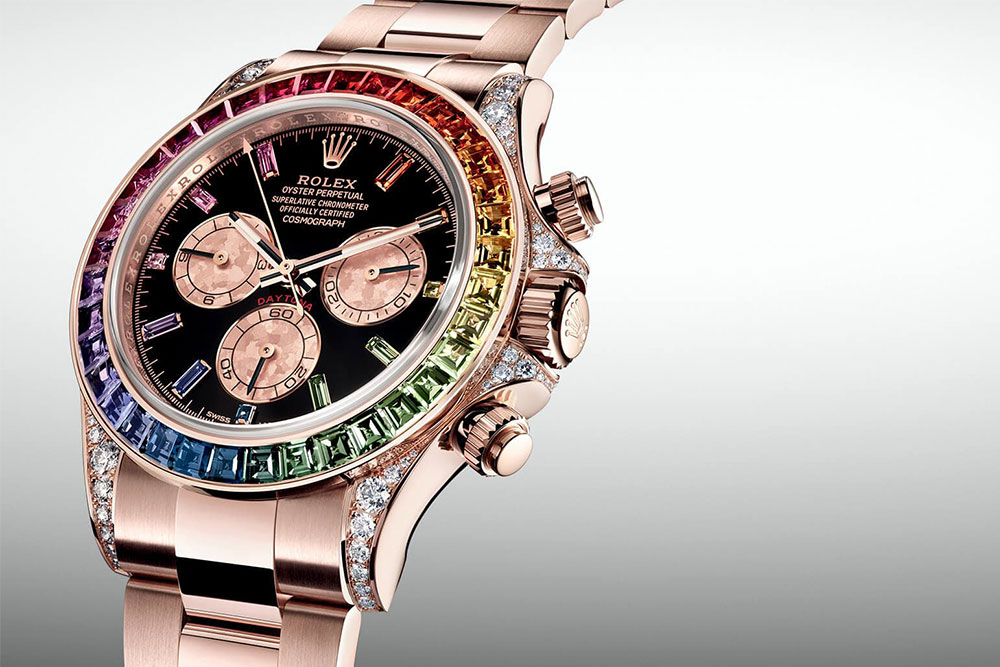 After more than half a century, the Rolex Daytona remains one of the brand’s most desirable pieces, securing its place as an icon among timepieces and an important part of Rolex’s own history.

Browse some of the Rolex Cosmographs in stock at David Duggan Watches, or if you’d like to discuss buying or selling a Cosmograph, get in touch to make an appointment.