An almost instant hit when it was first launched in 1999, Patek Philippe’s Twenty-4 came of age in 2020. To celebrate One To Watch takes a closer look at this iconic ladies watch.

It’s 21 years since Patek Philippe launched its very first Twenty-4, unabashedly designed for young women wanting an ‘everyday’ watch that they could wear at any time of day and night (there’s a clue in the name!).

Inspired by the men’s Gondolo, launched in 1993, it featured a distinctive Art Deco rectangular case, a popular aesthetic choice during the 1990s. The Twenty-4 also offered the unusual combination of a stainless steel bracelet – Patek’s first on a ladies’ watch – alongside brilliant-cut diamonds – some of which replaced the majority of numbers on the dial. As we’ll see in a moment, this combination remains a distinctive feature of the line, despite a radical overhaul in 2018. 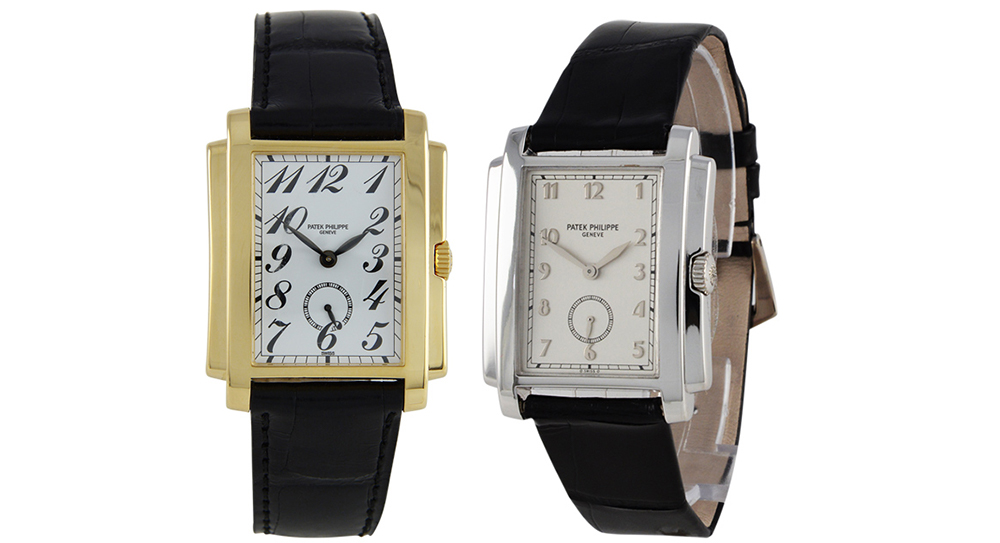 Above: the Gondolo was the original inspiration behind the Patek Philippe Twenty-4 series.

But it wasn’t just the choice of metal that made the Twenty-4’s bracelet special. Using slightly curved links to create an articulated band, the bracelet had a snug feel on the wrist as well as a pleasing sense of symmetry. And, with water resistance up to 30 metres, it really was – and remains – an all-rounder, looking as good by the pool as it does at dinner.

But while the Twenty-4 came with all the extraordinary craftmanship that you’d expect from a Patek Philippe timepiece, there was one thing missing: a self-winding movement. Instead, the watch was equipped with a quartz movement that incorporated six rubies and 57 parts. The general consensus seemed to be that women were more interested in a watch’s look and feel rather than what lay under the hood, so to speak.

All that changed in 2018, though, when Patek Philippe unveiled its new Twenty-4 Automatic range, featuring the tried-and-trusted calibre 324 SC self-winding movement, more commonly seen in the Nautilus reference 5711, as well as others.

The choice of calibre meant a change in design, with the Twenty-4 now housed in a round 36mm case with slimline 10mm profile. And, perhaps in a long-overdue nod to the fact that women are curious about the inner workings of their watch, Patek Philippe fitted a sapphire crystal case back, leaving the wearer free to admire the beautiful mechanical movement. 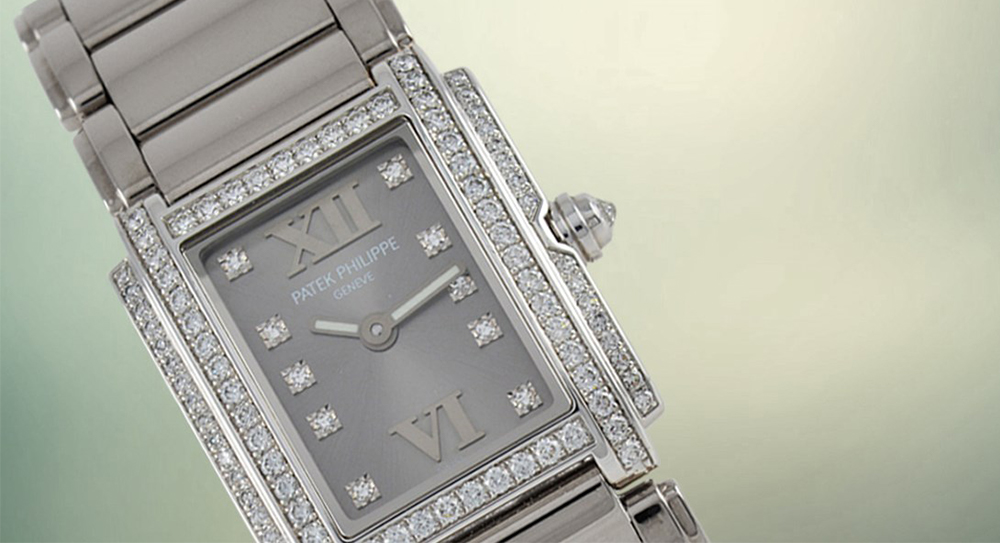 Diamonds remain a core feature, though. The reference 7300/1200A, for example, comes in a choice of stylish blue or grey sunburst dial with black gradation, steel bracelet and 160 hand-set Top Wesselton diamonds. If you’re looking for high-impact glitz, though, then you’ll want to check out the reference 7300/1450R rose gold Haute Joaillerie model. It features an eye-popping 3,238 diamonds presented in a ‘snow’ setting – each one placed by hand!

That beautiful bracelet remains a feat of horological engineering, with its delicately cambered central links. Patek’s master craftspeople have taken the symmetry one step further, though, incorporating the 12 and 6 o’clock links into the diamond-set bezel. And while the traditional steel bracelet remains a staple, it can also be selected in 18k rose and white gold. All are finished off with Patek’s newly patented fold-over clasp.

It may be a radical departure from the original, but such is the enduring appeal of the Art Deco oblong that Patek Philippe continues to make them with the quartz movement. The reference 4910 remains a bestseller, despite a general collapse in interest for oblong-shaped watches in recent years.

The Twenty-4 also bucks the broader female trend in taste for ‘oversized’ watches. It’s not uncommon to see the likes of Jennifer Aniston or Victoria Beckham wearing what are traditionally considered ‘men’s’ watches, including the much-loved Patek Philippe Nautilus. While opinions vary on what oversized means, female wrists tend to be slimmer, so anything from about 38mm onwards fits into that aesthetic. Ultimately, of course, the watch you feel most comfortable wearing is a question of personal preference.

What’s particularly interesting about the Twenty-4 is that it marked Patek Philippe’s first collection exclusively dedicated to a female market. Hard to believe in a way, given that way back in 1851 Patek counted Queen Victoria herself as a fan, after she picked out a blue Patek pocket watch with diamonds while visiting the Great Exhibition in London. 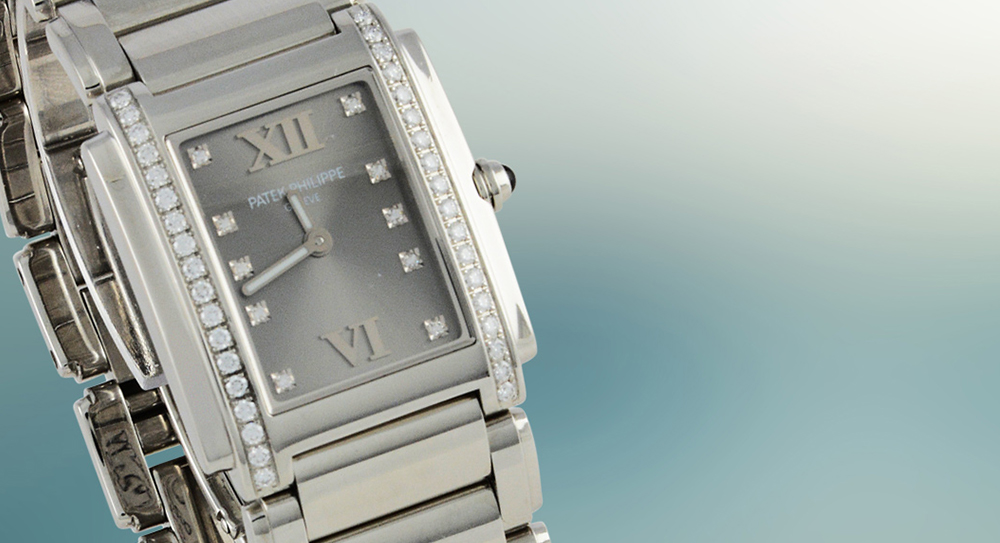 What’s more, Patek’s first wristwatch was commissioned by the Countess Koscewicz of Hungary in 1868. Almost 40 years later, it then made the first complicated ladies’ wristwatch with a five-minute repeater. But, generally speaking, over the years Patek has opted for women’s versions of ‘male’ classics, including the Calatrava, Nautilus and Aquanaut.

Twenty-one years after its first introduction, the Twenty-4 remains something of a trailblazer for this remarkable brand. And, says our founder, David Duggan, it is a great option for ladies interested in taking their first steps into the Patek Philippe collectors’ market. “They’re lovely watches,” he says. “A great all-rounder and a good seller. The market for oblong watches isn’t what it used to be, but tastes come and go, so now could be a great time to invest in one. They certainly hold their value well.”

If you’re interested in buying a pre-owned Twenty-4 or any other Patek Philippe model, please don’t hesitate to get in touch. We’ll be delighted to walk you through the options. Whilst our showroom remains closed during the time of Covid, we hope to be opening soon and, in the meantime, we are available to discuss your requirements by phone on 0207 491 1675 or 020 7491 1362.