Now, more than ever, the Patek Philippe Nautilus is considered the world’s most prestigious and desirable luxury sports watch. One To Watch takes a closer look at this iconic timepiece and finds out what makes it so popular and why it has become such a sound investment.

Following the success of the Audemars Royal Oak, a luxury steel watch with integrated bracelet that was launched in 1972, Patek Philippe commissioned its designer, Gérald Genta, to create the company’s first sports watch.

Inspired by Patek owners the Stern family’s love of sailing, Genta came up with the now iconic design, featuring a porthole-shaped bezel. While lunching at a restaurant during the 1974 Basel Watch Fair (today’s Baselworld) – as Genta himself later explained – he asked the head waiter for a piece of paper and pencil and began sketching. The design process took no more than a few minutes and two years later, the Nautilus – named after Captain Nemo’s submarine in the 1870 novel Twenty Thousand Leagues Under the Sea, written by Jules Verne – was unveiled.

The original Nautilus, reference 3700/1, was crafted in a stainless steel alloy that had been extensively used in the construction of World War II tanks for its protective qualities and because it was lighter than ‘regular’ steel. The watch had a diameter of 42mm, earning it the nickname ‘the Jumbo’, but was also very thin, with a height of just 7.6mm. Its octagonal bezel was secured to the patented case by four lateral screws (or ‘ears’) to ensure water resistance to 120 metres and enhance the porthole design. Other features included a black dial with horizontal, blue-toned embossed bars, luminous white gold baton hour markers and hands, and the date window at 3 o’clock. Inside, the watch was powered by the automatic calibre 280255 C, the same movement used in the first Audemars Royal Oak model.

It was a bold move: featuring simple stainless steel and a manual movement when luxury watches at the time were expected to come in gold and the Quartz mechanism was on the rise. And, it came with an equally bold price tag of $3,100 (by comparison, a Patek Philippe mechanical wristwatch in 18-karat-gold was then retailing for just under $4,000). The gamble paid off, however, causing something of revolution in watchmaking. Before long, the Nautilus had gathered a following of avid aficionados. In fact, it became so popular that, 20 years later, it would be the inspiration for another Patek Philippe icon, the Aquanaut.

There have been various evolutions over the years, though the Nautilus’s distinctive shape has remained untouched. In 1978, Patek Philippe created a prototype with a white dial that was ribbed like the original black. Two years later, it launched the Nautilus for Ladies (reference 4700) and, in 1981, the reference 3800/1A, with a reduced diameter of 37.5mm and the new calibre 335 SC movement.

The next major alteration came in 2005, with the introduction of a triple complication model, the reference 3712, which boasted a power reserve indicator, analogue date and moonphases. The watch was powered by the 240 PS automatic movement with a gold micro-rotor and sapphire crystal for display purposes.

Just a year later, the model was discontinued following the launch of a new generation of Nautilus watches. To celebrate the timepiece’s 30 anniversary, Patek Philippe brought out the reference 5711/1A, with a 43mm-diameter case, a dial with central seconds and a calibre 324 SC to power it. This self-winding movement incorporated several of Patek Philippe’s innovations, including the four-spoke Gyromax® balance wheel and slotted poising weights, and the Spiromax® balance-spring in Silinvar®, which maintains the oscillations at a frequency of 28,800 vibrations per hour.

Other updates included a subtle curvature to the ‘ears’ on the bezel, the Patek Philippe logo was written in a new font and repositioned at 12 o’clock, and a more comfortable, double-folding clasp on the bracelet was added.

Also in 2006, Patek released the reference 3712, with a slightly larger case and a few changes to the face, including enhanced blue tones on the embossed bars, slimmer hands, and a larger date and moonphase counter. The direction of the date numbers from nine to 23 were also now upside down for better legibility. This was shortly followed by the Nautilus Chronograph reference 5980, featuring a new automatic chronograph movement in a 44mm case.

Several model variations for men and women in stainless steel and precious metals have been introduced over the years. In 2010, the reference 5726 featured an annual complication and, in 2014, the Nautilus Time Travel Chronograph reference 5990/1A added a dual time function to a column-wheel flyback chronograph. 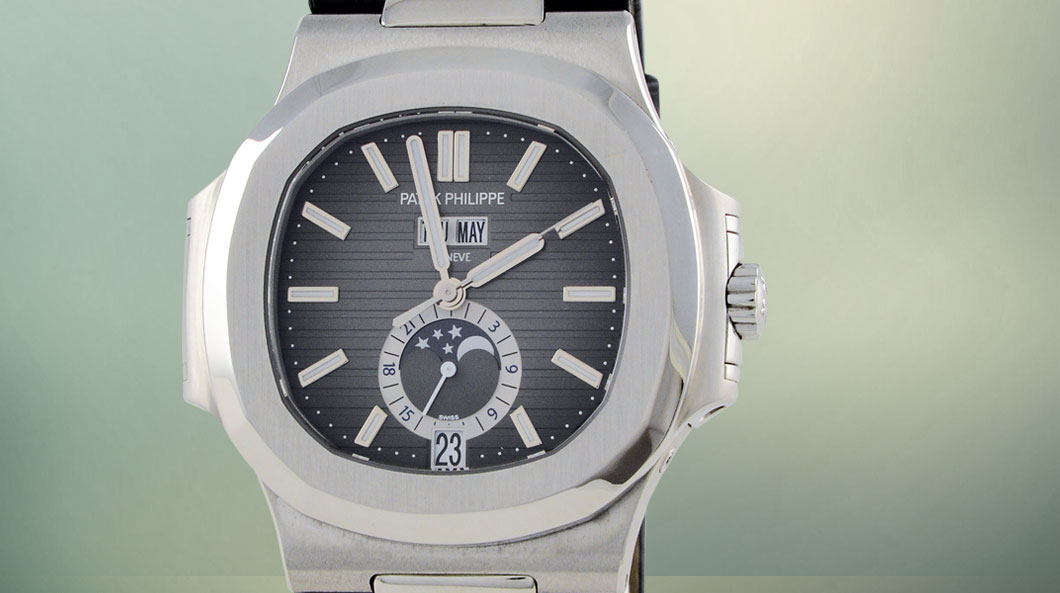 To mark the 40th anniversary in 2016, two new references were introduced: the three-hand 5711/1P in platinum and the flyback chronograph 5796/1G in white gold. Both featured a new blue tone on the dial, 12 applied batons in white gold with diamonds for hour markers, and the anniversary citation.

In 2018, the reference 5740/1G-001 was the first Nautilus model with a perpetual calendar complication, followed a year later by the Nautilus 5726/1A Annual Calendar with a blue dial, the colour of the original model.

Over the years, the Nautilus has earned a reputation for not only holding its value, but often exceeding it, making it an extremely astute investment. This is largely due to the stamp of high quality that comes with any Patek Philippe, but also its scarcity. Waiting lists for some new models can be up to 10 years, while rare vintage models have been known to sell for vast sums. For example, the 1978 prototype model sold in 2015 at Sotheby’s Geneva for an impressive 250,000 Swiss francs. Similarly, the scarcity of the anniversary edition reference 5711 on the primary market has resulted in corresponding increases for both new and pre-owned models. One reference 5711/1A in stainless steel with the so-called Tiffany dial sold at auction in 2018 for 125,000 Swiss francs (almost the same in US dollars)  ̶  more than four times its recommended retail value new.

And, with production currently stalled due to the global Coronavirus pandemic, fewer Nautilus watches are coming onto the market, increasing the value of existing models. Now, more than ever, you couldn’t find a safer investment.

When it comes to class, quality and value for money, the Nautilus really can’t be beaten. As our own David Duggan says: “Right now, the Nautilus is massively popular, and I personally love the Travel Time Chronograph 5990 series. Its self-winding chronograph with dual time module makes this a great investment choice. I think it’s quite simply a wonderful watch.” 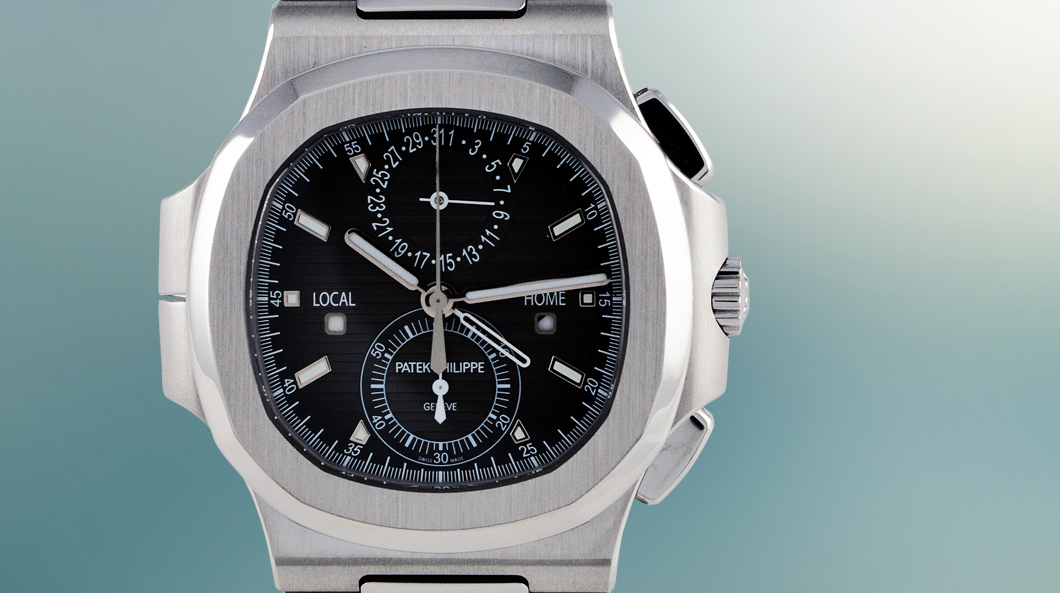 If you’re interested in buying or selling a Patek Philippe, David Duggan Watches is open for business, even though we have temporarily closed our showroom for safety reasons during Coronavirus. Simply call 0207 491 1675 or 020 7491 1362 and we will be delighted to assist you.