If ever there was a watch that’s a product of its time, the Patek Philippe Aquanaut is it. It was 1997 and the .com era was on the rise. Thanks to the many business opportunities offered by the newly-formed internet, there was a boom in young, self-made millionaires with cash to splash on luxury items, including, of course, watches.

In response, Patek Philippe launched the Aquanaut, aimed specifically at a younger market and the Geneva brand’s first luxury steel sports watch in 20 years. Not surprisingly, it chose the much-loved Nautilus, which had been such a hit back in the 1970s, as inspiration for the model.

Like the Nautilus, the Aquanaut featured a rounded octagonal case, vertically satin-finished flats and chamfered and polished edges. Unlike the Nautilus, however, it adopted a simpler, three-part design that eliminated the need for left- and right-hand hinges, while continuing to ensure water resistance to depths of 120 metres.

The watch was launched with the reference 5060A, which, at 35.6mm, was smaller than the current Nautilus. It shared the Nautilus’s port-hole-inspired, eight-sided bezel, initially conceived by legendary watch designer Gérald Genta, but had a more contemporary feel, with a solid, screw-down case back. Its distinctive dial, offered exclusively in black, featured a central raised guilloche motif, modern Arabic numerals in white gold and a luminous coating for easy reading in low light, an unusual aesthetic at the time.

Another defining feature of the Aquanaut was its rubber strap, a first for Patek Philippe. Impervious to saltwater, UV deterioration and bacteria, it comprised more than 20 materials and was even tested by the US Food and Drug Administration. Given its suitability for water sports, the strap was named the ‘Tropical’. In a bid to mimic the integrated bracelet of the Nautilus, the strap mirrored the pattern on the dial of the Aquanaut to create a sense of continuity – a subtle design element that can still be found in the collection today.

Inside was the self-winding Calibre 330 SC, a manufacture movement with sweep seconds hand and date indicator. Measuring just 3.5mm thick, it was equipped with Patek Philippe’s patented Gyromax balance wheel and oscillated at 21,600vph. A 21-karat gold unidirectional rotor charged the spring, which stored enough power for 48 hours of use.

Like the Nautilus before it, the Aquanaut caused something of a culture shock among Patek purists, who felt its stripped-down appearance challenged what was expected in a luxury watch, but it was an instant hit with the younger crowd.

Following the success of the reference 5060A, Patek Philippe released the reference 5064 A-001 in 1998, which offered a smaller, 34mm case and was powered by the quartz Calibre E 23 SC. Subtle updates to the dial included the size and position of the date window and hour numerals.

As fashions for wearing larger-faced watches grew, Patek released the reference 5065A, which offered a jumbo brushed steel case measuring 38mm and made the gap in size between the Aquanaut and the Nautilus considerably smaller. It also featured a sapphire case back, so you could see the newly upgraded Calibre 315 SC inside.

The reference 5065/1A-010, released in 1999, introduced a stainless steel, highly polished Aquanaut bracelet, which came with a pre-cut rubber strap, allowing the wearer to switch between the two. And, a year later, Patek introduced a full yellow gold version in the reference 5065 /1J-001. 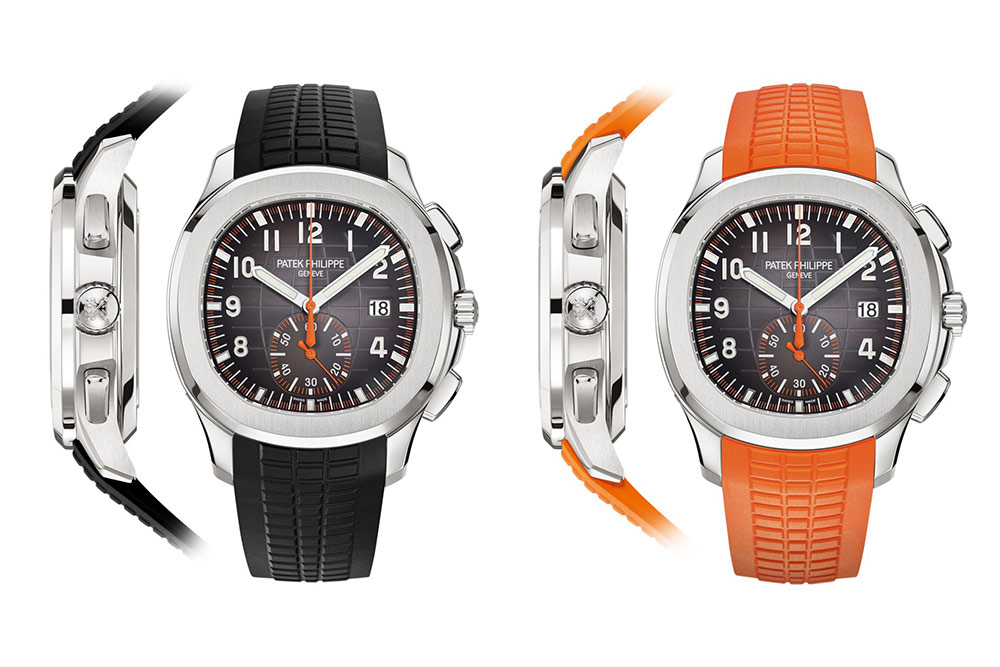 The watch has evolved over the years, with the initial 1,000-piece reference 5060A giving way to larger, more complicated and gender-specific models. It has even won over the early critics, becoming a much-sought-after staple for serious watch collectors.

In 2011, Patek Philippe introduced its first complication to the collection – a dual time mechanism – in the Aquanaut Travel Time reference 5164A. A second time zone function was shown via a fourth hand and two apertures on the dial that indicated whether the wearer was reading local or home time. The feature would earn it the accolade ‘Best Travel Watch’ that year.

In 2017, Patek Philippe released the first Aquanaut with the brand’s ‘Advanced Research’ features, the reference 5650G. These included a Spiromax® balance spring made of Silinvar® (Patek’s proprietary silicon that’s 60% harder and 70% lighter than steel) and a flexible mechanism for the second time zone settings. Functions that previously required several lubricated posts and individual components were served by a unitary structure within the dial-side opening. As a result of this measure, the complication’s parts count was reduced by two-thirds. It was also the first Patek Philippe watch to have a partially open dial to show off the design of the movement.

To mark the Aquanaut’s 20th anniversary that same year, Patek Philippe released the reference 5168G, featuring a blue hobnail dial and 42.2mm case made of solid white gold. Further updates included the introduction of the dial and strap in rugged shades of green. And, most recently, Patek Philippe chose the occasion of the Watch Art Grand Exhibition in Singapore this year to unveil its latest special edition Aquanaut reference 5167A-012. With red accents, strap and minute markers – a nod to Singapore’s flag – it has a 40mm case and houses the Calibre 324 S C, which, as in earlier models, is visible through a sapphire case back that is printed with ‘Patek Philippe Singapore 2019’. 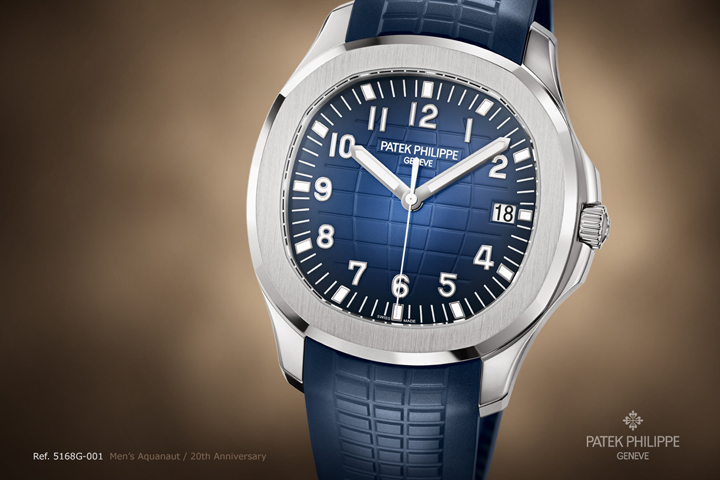 The Aquanaut has grown in stature, while remaining faithful to its original design mantra as a sleek, no frills sports watch. And it’s earned some pretty high-profile fans along the way. Still popular with the younger market – Spider-Man actor Tom Holland was spotted wearing an Aquanaut at the 2018 Wimbledon men’s final – and it has also graced the wrists of more established celebrities. Beatles legend Sir Paul McCartney wore an Aquanaut for his wedding to American heiress Nancy Shevell in 2011 and then again the following year when he appeared on the cover of Rolling Stone magazine. Meanwhile his former bandmate, Ringo Starr, has been seen wearing the watch for countless public appearances. Another big name, this time from the world of business, Hungarian-American investor and philanthropist George Soros is pictured wearing a reference 5055A on the cover of a biography of the billionaire tycoon, proving that a watch doesn’t have to be the most expensive on the market to be highly valued.

“The Aquanaut has become a really sound investment piece – perfect for the new collector or someone looking for a stylish sports watch,” says David Duggan. “I think part of the growth in interest is driven by sheer economics – an Aquanaut tends to be more affordable than its cousin, the Nautilus, but I think it’s also about the fact that it beautifully blends form with function.”

Take a look at some of the Aquanaut models that we’ve had in the showroom. Or, if you’re interested in buying or selling a Patek Philippe Aquanaut, find out about David Duggan Watches and contact us to make an appointment in the showroom.