From an idea initially conceived by a distinguished London collector (and long-standing David Duggan Watches client) comes the story of a brilliant enamellist creating a one-of-a-kind pocket watch. The pocket watch has spent the past decade in the ornate halls of the Patek Philippe Museum in Geneva – as part of an agreement between the brand and the commissioner. Now, this remarkable pocket watch has been released back to its private owner, who sat down with One to Watch to explain how this rare masterpiece came about.

With an enamel miniature of a painting by Swiss artist Jacques Alfred van Muyden of a mother gazing into her baby’s eyes (circa 1859) on one side of the hunter case, and a perfect reproduction of Pierre Auguste Renoir’s 1890 painting La Lecture on the other, you’d be forgiven for thinking that the pocket watch was an antique. But closer inspection reveals that each painting is dated 2002 and 2004 respectively.

Set in 18K yellow gold, with a modest diameter of 38.65mm, this is the handiwork of Patek Philippe’s master enameller, Suzanne Rohr, and, like most rare, highly collectible watches, half its value lies in its workmanship and the other in its provenance. 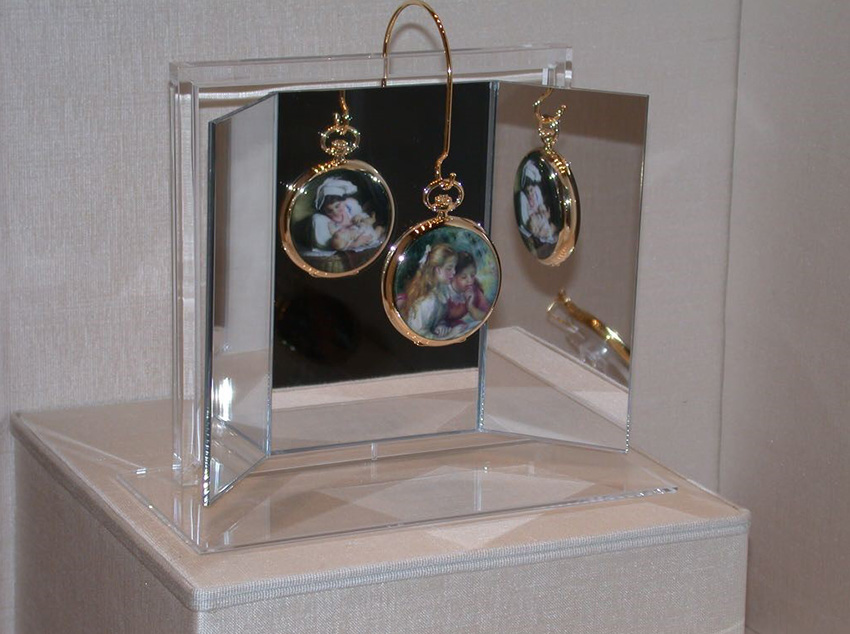 What makes this particular pocket watch so special?

This extraordinary timepiece came about following an encounter in an auction room between a private collector and Philippe Stern, then president of Patek Philippe.

“When Philippe Stern spoke about Rohr, his eyes would light up,” says our collector, who prefers to remain anonymous. “He has so much respect for her work. I met him back in 1998 and got me hooked on enamelling straight away. Enamelled pieces were comparatively cheaper to buy back then; I remember the Patek Philippe store had four or five Suzanne Rohr pocket watches for sale, so I bought them all. Philippe realised that these works were going out faster than they could make them, so he stopped selling them to the public and started keeping them for the museum.”

So, our collector made Stern a proposal: a pocket watch commission featuring two enamel miniatures: one side with Philippe Stern’s favourite painting recreated in enamel, the other featuring Rohr’s. Stern accepted the proposal and in 2001, she began painting both miniatures using a technique called Grand Feu (‘large fire’) enamelling, a process that would take her three years to complete.

When asked for her favourite miniature scene, Rohr could have chosen an easier painting to replicate but instead opted for La Lecture – a colour-rich, impressionistic piece – typical of Renoir – featuring two girls reading. To appreciate Rohr’s remarkable talent in realising the piece is to understand the art of enamelling; probably the trickiest ways to finish a watch dial. 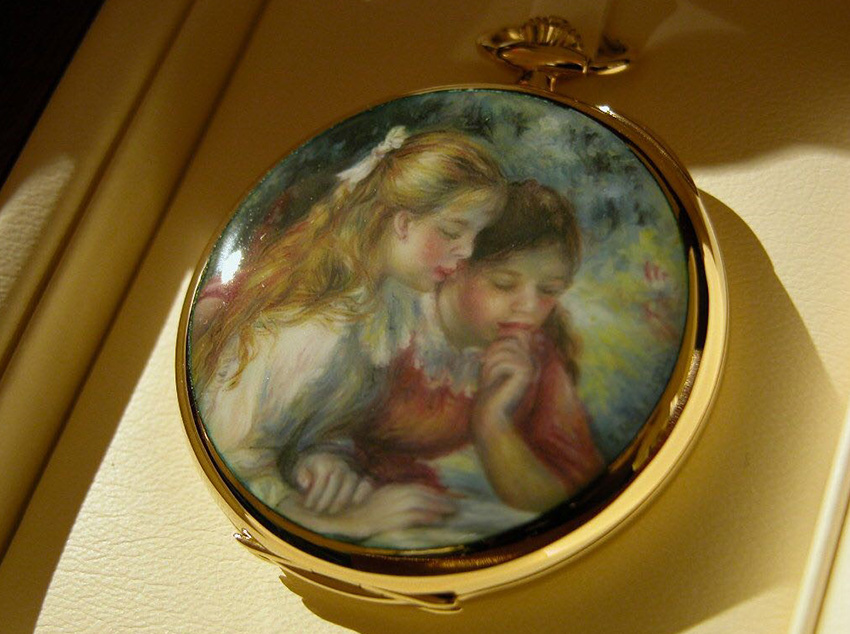 While engrossed in the miniatures, it’s easy to forget that the timepiece itself is a premium Patek Philippe pocket watch. The collector has a passion for Breguet numbers and wanted a power reserve indicator added to the dial – a practical complication rarely spotted on pocket watches.

“I was very clear what I wanted,” says the collector. “I wanted Breguet hands and a Hunter case and I asked them to pick the two pictures. I could have picked the miniatures myself, but I thought it would be more interesting to ask them to choose their favourites.”

Grand Feu enamelling requires layers of colour, built up slowly one at a time. The enamel, essentially a combination of powdered glass, silicates and other elements, is then fired at high temperatures and transformed into a vivid, colourful, translucent sheen. Rohr’s specialism, known as ‘The Geneva Technique’ involves painting and firing the enamel miniatures first, then sealing them with several layers of clear enamel to enhance their colour and ensure they last for years.

It is hard to understate the difficulty involved in this process. Each stroke must be delicately painted on with a very fine brush – indeed, Jaeger-LeCoultre enamellists reportedly use a brush made of a single marten hair – and because the canvas is so small, the painting is done under a microscope or magnifier. It can take months or even years to hand paint a miniature upon a dial.

And it doesn’t get any easier from there. Every stage is fraught with risk and during each round of firing, bubbles can appear or debris from the kiln can land on the surface or the dial can crack in the heat. On top of that, the process is sensitive to the seasons; dials that are fired in winter can look different to those fired in summer and accommodations must be made.

Combining art and alchemy to achieve a distinctively smooth, even finish, the enamellist must, therefore, mix the powder agents in just the right quantities.

Indeed, Claude-Eric Jan, director of specialist dial enameller Donzé Cadrans (now owned by Ulysse Nardin) told the New York Times that as many as 75% of the company’s dials have to be scrapped during production.

Little wonder then that many luxury watchmakers choose lacquer dials instead to imitate the creamy sheen of an enamel watch face.

Even for most modern-day artists, it is difficult to comprehend the talent and dedication it takes to accurately reproduce a Renoir painting accurately or a Vermeer in miniature. Most involve painting techniques and styles that aren’t often attempted by 21st-century artists.

You only need to admire the colours at work to appreciate the magnitude of the task at hand. Rohr’s genius lies in her chameleon-like ability to emulate both Impressionists and Old Masters, evident if you look beyond the girls into the rich background of foliage and flowers.

Famously private and reclusive, Rohr always worked from home, painting dials at her kitchen table and firing them using the kilns in her house. In 2016, she retired at the age of 80, following an illustrious 40-year career working almost exclusively for Patek Philippe. A year later, she won a Grand Prix d’Horlogerie de Genève Special Jury Prize, alongside her protégé, Anita Porchet – one of the few remaining master enamellists in the world

Ever since the turn of the 20th century, the art of enamelling has steadily declined, largely due to its time-consuming, challenging and costly process. As demand fell, so did supply. Artisans seemed reluctant to teach this dying art and, unlike many other protected heritage crafts, there is no organisation dedicated to the preservation of enamelling as a skill, or a school to teach newcomers. 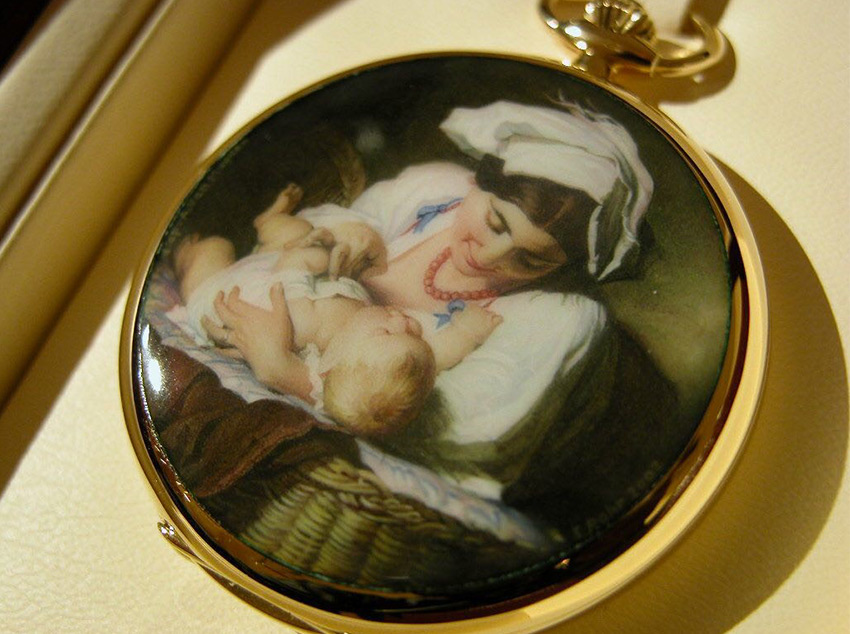 Nevertheless, as one of the two remaining (alongside Rohr) grand high masters of the trade, Porchet’s work is in high demand and she has created collections for the likes of Vacheron Constantin and Patek Philippe. Meanwhile, other watch houses look for new ways to establish their own in-house enamellists.

It’s hard to say what the future will hold for this intricate art, but there’s no doubt that collectors remain fascinated. In 2015, another enamelled miniature pocket watch – the Patek Philippe Ref. 974/11J-001, featuring Renoir’s Portrait of Two Girls – was the top lot of Antiquorum’s auction of ‘Important Modern and Vintage Timepieces’ in Hong Kong. That it also happened to be enamelled by Rohr is probably why it fetched more than double its pre-sale estimate.

As for the Stern/Rohr pocket watch? The owner has already turned down a £1.4 million offer for the timepiece. They conclude: “It’s a very big sum, but I love the pocket watch so much that I have no intention of selling it.”

This particular Patek Philippe is extraordinarily rare, and one-off icons of this type hardly ever change hands. But, for those of us not lucky enough to own a one-off Patek Philippe/Rohr masterpiece, there are other highly collectible models entering the vibrant pre-owned luxury watch market all the time.

If you’re interested in investing in a Patek Philippe watch, get in touch or visit us at our Burlington Arcade showroom in the heart of Mayfair, London and we will be delighted to assist you in finding the pre-owned watch that ignites your passion!

The images in this article are provided courtesy of our client, who wishes to remain anonymous. The images must not be copied or reproduced in any way without receiving specific permission from David Duggan Watches.