A Guide to: the World Time Complication

As the name suggests, a World Time watch allows the wearer to read the time in the world’s 24 major time zones.

It was invented by independent watchmaker Louis Cottier in 1931.

How does the World Time complication work?

The watch’s hour and minute hand are coordinated with an outer chapter ring displaying the names of 24 reference cities for each time zone. A pusher, or button, on the case enables the wearer to move the chapter ring one city at a time. The hour hand automatically jumps an hour ahead or behind to the time in the reference city (in other words, your local time). A rotating 24-hour inner chapter ring turns once a day, showing the time in the other cities on the dial. 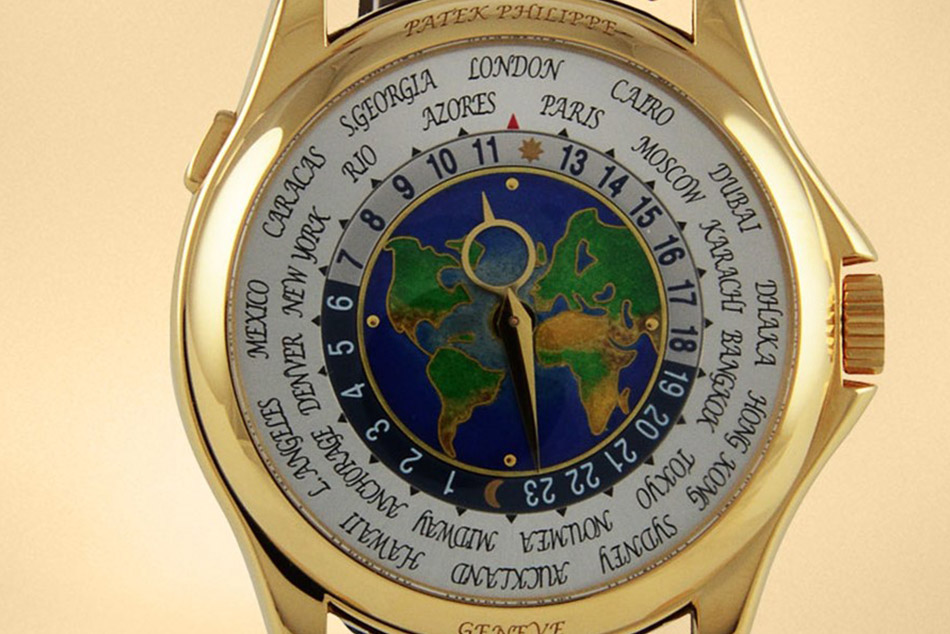 To tell the time in another city, line up the watch’s hour hand with the reference city that corresponds with your local time using the rotating bezel. For example, if you are in London and it is 11pm, align ‘London’ with 11 on your watch face. To find out what the time is in Moscow, swap to the 24-hour dial and read the time that aligns with Moscow, which would be 1am. At the same time, you can tell the time in all the other cities. The time difference between local time and all other cities is measured in hours only, since the minutes stay the same.

While Louis Cottier is credited with making the first working World Time watch, it was, in fact, his father, Emmanuel, who came up with the original concept in 1885. The Swiss watchmaker was approached by the chief engineer of the Canadian Railway, who was fed up with the confusion caused by having to change his watch when travelling between towns and cities (in those days, many operated on their own local clock) and asked him to come up with a solution. 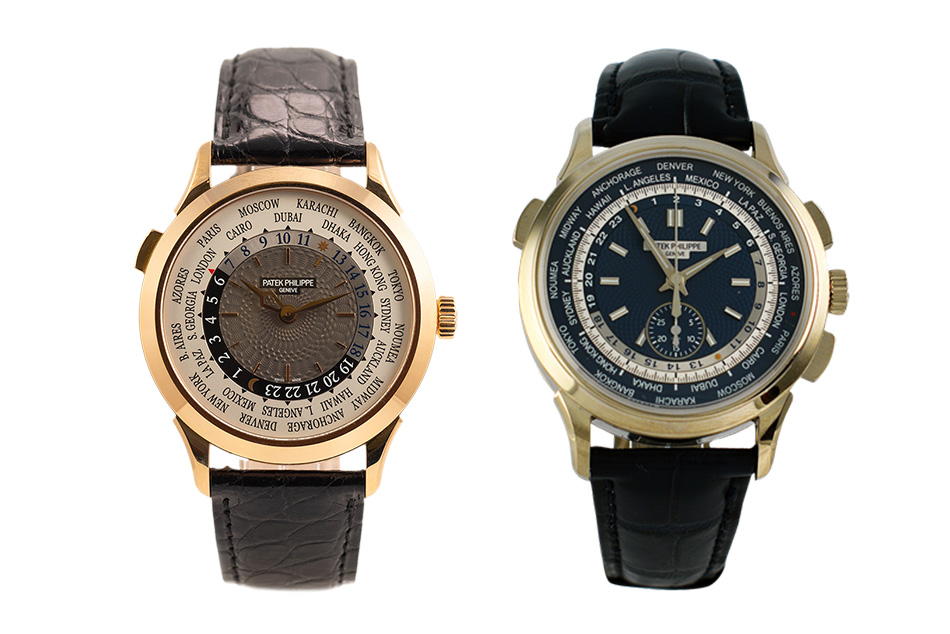 Cottier’s mechanism for reading multiple time zones was not successful, but it would inspire his son, Louis – a double Patek Philippe prize winner before he’d even completed his apprenticeship – to develop his ‘heures universelles’ in 1931. The complication featured the local time with hour and minute hands at the centre and a rotating 24-hour ring bordered by the names of different cities or places. It was originally designed for pocket watches, but, in 1937, with these timepieces becoming less popular, Patek Philippe commissioned Cottier to produce the first World Time wristwatch. He would go on to supply them to many other prestige brands, including Rolex and Vacheron Constantin.

Cottier’s mechanism is still used today as the base for most World Time watches, though they have become more elaborate in design over the years. Patek Philippe is particularly known for its extraordinarily beautiful cloisonné enamel maps and dials that feature mythical creatures and symbols.

A World Time watch can tell you a lot about the geopolitics of the time in which it was made thanks to the choice of major cities displayed around the dial. The most recent change came at Baselworld 2016, when Patek Philippe unveiled its new ref. 5230 with a World Timer to reflect a number of shifts, including the fact that Dubai has replaced Riyadh, Saudi Arabia, as the internationally-recognised representative city of its time zone.

These highly-attractive timepieces are celebrated by collectors and enthusiasts as much for their elegant design as their instant access to multiple time zones. It’s no surprise, then, that tennis ace and frequent flier Novak Djokovic is a fan of the World Time watch. American comedian Kevin Hart, meanwhile, has been spotted wearing Patek Philippe’s World Time ref. 5230R-001 in stunning rose gold.

In a world of smartphones and instant information, one may think a complex, and expensive, watch complication has had its day. But, with it beauty and easily readable mechanism, the World Time watch remains just as relevant as it ever was. The only slight problem is that there are now more than 24 time zones (37 in total) and not all of them are a full hour apart  ̶  for example, India is GMT+5.5 hours, so it can have its drawbacks. Some brands, such as Vacheron Constantin, have tried to improve on the original design by implementing all possible time zones, so if you are a regular traveller to India, there is a solution.

One other thing to be aware of is daylight savings time cannot be calculated using a World Time watch bezel so the wearer will have to take this into account.

To honour the originators of the World Time, here are a few of our Patek Philippe favourites:

Patek Philippe World Time ref. 5930G – by combining the calibers found in the 5990 and 5130 movements, Patek Philippe created the world’s smallest and thinnest world-timer-chronograph on the market. Launched in 2016, its ‘winglet’ style lugs will please any vintage collector, but the electric blue dial, as well as innovations such as the flyback chronograph, brings the model nicely into the modern age.

Patek Philippe World Time ref. 5230 – released to accommodate new time zone designations (for example, Moscow shifting one hour closer to Western Europe) this model is currently available in white or rose gold. A smart, modern timepiece with a simple, smooth case and beautiful guilloche dial that still manages to pack a lot of information in – 24 time zones to be exact.