A Guide to: The Day-Date Complication

For centuries, the horological world has pushed the limits of watchmaking, developing ever more elaborate movements – or complications – either to increase functionality or simply for the aesthetic pleasure of the thing. For many collectors it is these complications that add to the desirability – and often value – of a given timepiece. So, to celebrate the 35th year of David Duggan Watches, One To Watch will spend the coming months exploring the origins and development of some of the most fascinating and sought after complications. This month, we look at one of the most useful – the day-date.

What is a day-date complication?

The day-date complication lets the wearer see the day of the week as well as the date. The most common form of display is through small apertures on the face of the watch, with the day positioned at noon and the date at three o’clock (the latter, so it can be checked without having to reveal the whole watch face from under the wearer’s sleeve).

Rolex was the first watchmaker to offer a waterproof and self-winding chronometer wristwatch with a modern calendar and instantaneous day display in addition to the date, when it launched the Day-Date in 1956. It remains the leading brand in day-date watches.

The days of the week and dates of the month sit on two discs that rotate beneath the watch face, automatically changing at midnight. They are typically set by moving the crown in one direction to change the day and in the other to change the date, or by using a special tool called a stylus to operate a small indented button on the side the watch. Most watches have to be manually adjusted at the end of 30-day months (or 28/29 for February) to ensure that the proper date is displayed. Today, the Rolex Day-Date is available with the days of the week in 26 different language options. 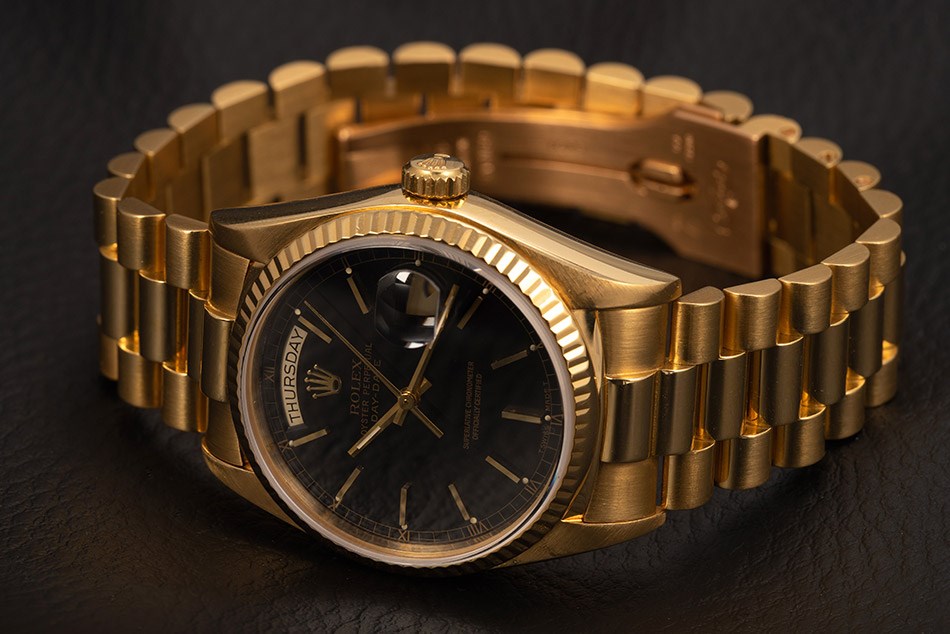 History of the day-date

While Rolex pioneered the modern day-date watch in the mid-fifties, calendar complications had been in use in pocket watches since the late-19th century. They were first patented in wristwatches in 1915 by Swiss watchmaker A Hammerly, who devised two complications: one that recognised today as a ‘pointer date’ and another that displayed the weekday in a window below 12 o’clock. By the end of the decade, the movement had become a common feature in many watches, though it had to be manually adjusted each day. 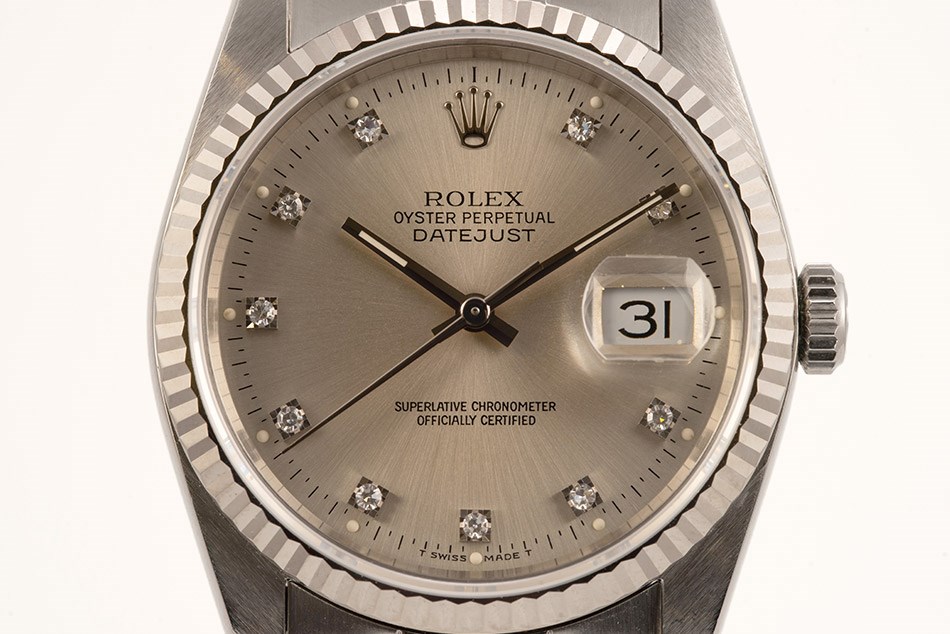 Rolex began to really establish its dominance in this complication, when, in 1945, founder Hans Wilsdorf introduced the Rolex Datejust, claiming it as the first wristwatch with a self-changing date. Shortly afterwards, Rolex introduced its ‘cyclops’ date magnifier, which enhanced the date aperture, apparently because Mrs Wilsdorf had trouble reading the date on her watch. Patented in the early-fifties and introduced on the Datejust in 1953, the cyclops innovation remains a Rolex signature feature. Further improvements came in 1955, with the date change occurring instantaneously at midnight as opposed to the slow roll-over that was previously the norm.

The Rolex Oyster Perpetual Day-Date became known as ‘the Presidents’ watch’, as several US leaders, including Roosevelt, Kennedy, Johnson, Nixon, Ford and Reagan all wore it. Initially, the term ‘President’ was given to the new style of bracelet attached to the Day-Date, apparently named after Lyndon Johnson, however, it soon came to commonly refer to the whole timepiece. 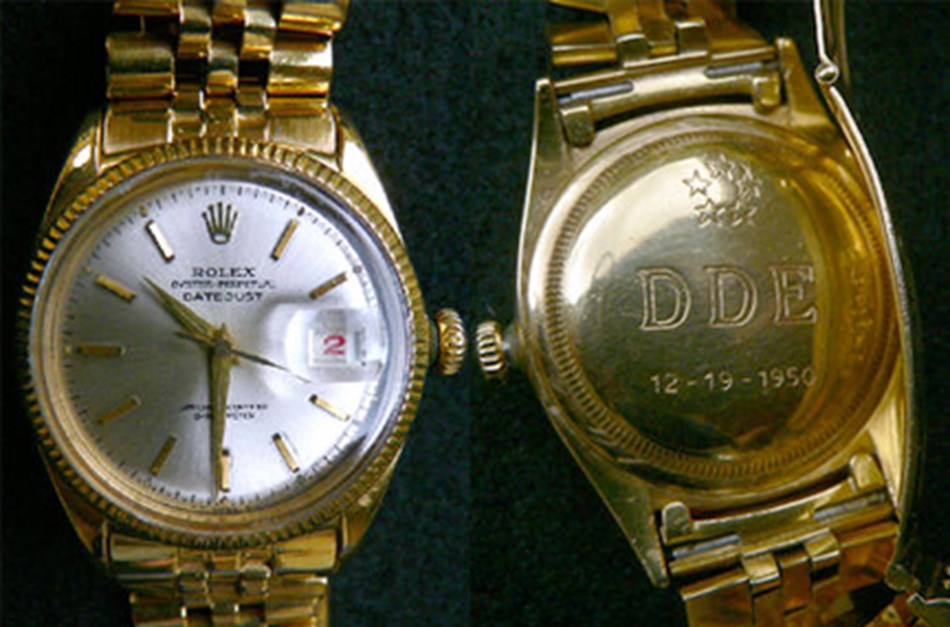 Perhaps the most famous, and controversial, piece, however, was the gold Rolex Day-Date given to JFK on his birthday by Marilyn Monroe, which she had engraved with the words “JACK With love as always from MARIYLN MAY 29th 1962”. The President is believed to have immediately instructed his aid to “get rid of it!” Even though the President never wore it, the watched still fetched £120,000 when it resurfaced and was sold at auction in 2005. 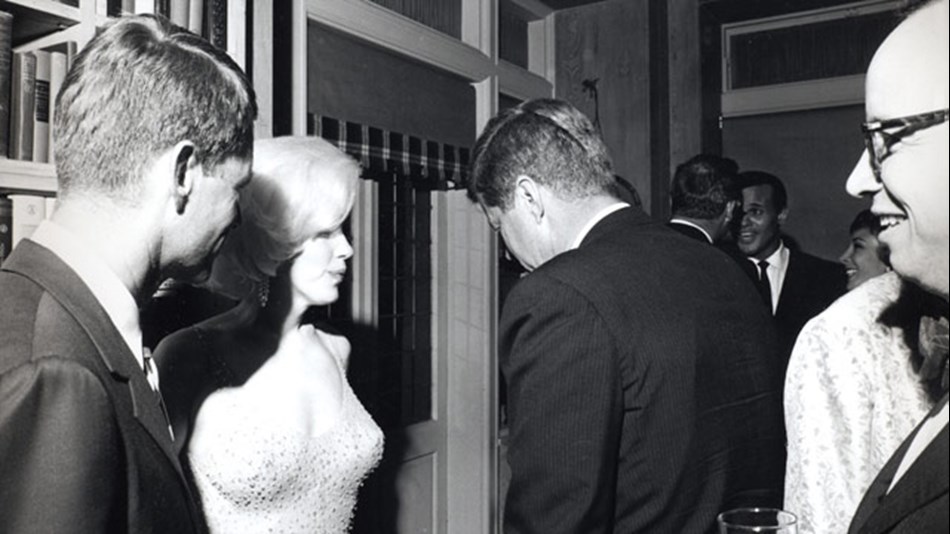 Accommodating the elongated aperture for the day part of the complication can detract from the design. Also, in order to fit all 31 numbers on the date wheel, they have to be quite small, depending on the dial size. While the cyclops aids legibility, some find its bubble shape interferes with the harmony of the watch and the raised lens is more susceptible to scratches. And, as most date calibres were designed when watches were a good six to 10 millimetres smaller in diameter than many modern men’s watches, it can mean that these smaller-diameter movements have to be fitted on a wider dial, which, in turn, requires the date window to be positioned oddly close to the centre of the face. 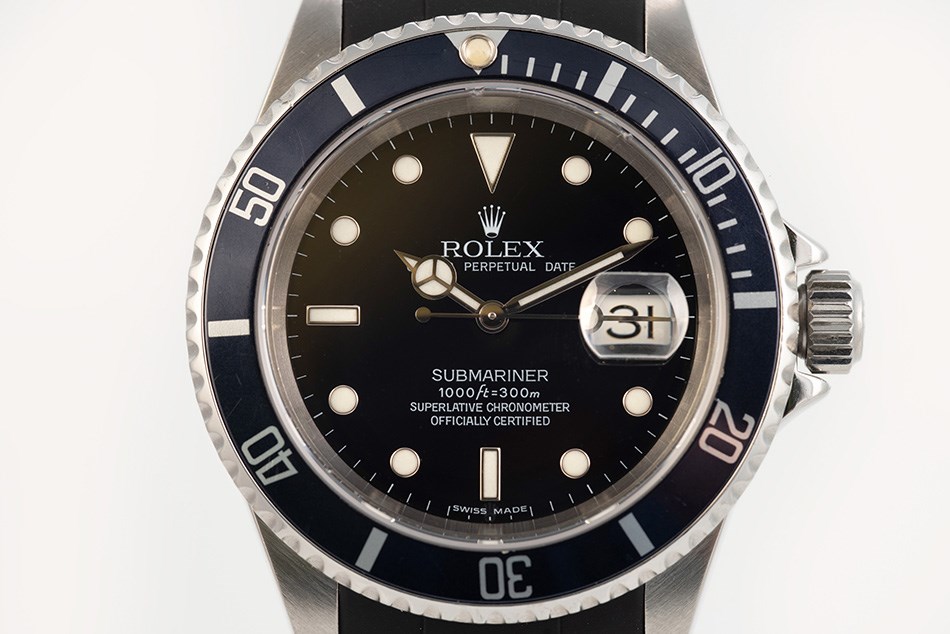 The cyclops lens as seen on the Rolex Submariner

While the Rolex Day-Date’s displays instantaneously jump to the next day and date at midnight, some of the traditional mechanisms of other day-date complications are rather more slow to update, meaning they can take up to two hours before and after midnight to advance to the correct setting.

Want to know more about the wonderful world of watch complications? You can download a PDF version of our 35th Anniversary Guide to Complications by following this link.