In August, admirers of fine wine and watches gathered to celebrate their joint passions with an exclusive event jointly hosted by David Duggan, Tudor watches and Corney & Barrow wine merchants. Since Tudor is Rolex’s younger, slightly less-well-known sibling, the idea was to explore hidden gems from prominent wine producers.

It was also an excellent opportunity to get closer look at Tudor’s latest pieces from Baselworld, including all five new men’s and ladies’ models, the first Black Bay in-house manufacture chronograph and some of Tudor’s most beautiful vintage pieces. The Burlington Arcade beadle that greeted everyone on arrival added a touch of tradition to the proceedings. 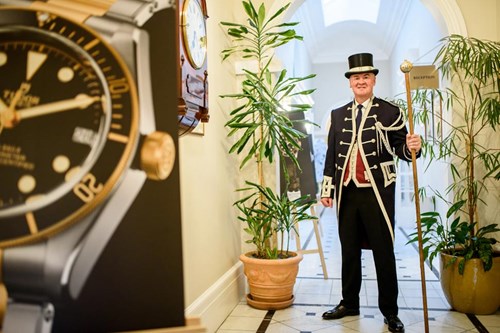 “It all started in 1926,” opened Sven Olsen, Tudor UK general manager, giving guests a little history of the brand during his welcome speech. He explained that Rolex founder Hans Wilsdorf had been committed to making a watch that could sell at a more modest price, yet that would offer the same, impeccable quality.

Though German-born, Wilsdorf was a complete anglophile who started his company in London and married a Scottish woman. He was drawn to the name ‘Tudor’ in part because, like Rolex, five letters sit perfectly on a watch dial. That, and the history of the War of the Roses, where the brand inherits its rose emblem. “So, we had Rolex, which wore the crown, and we had Tudor which was also the King. Two siblings,” said Olsen.

Wilsdorf had the two brands working largely side-by-side, sharing innovations, taking ideas from one and testing them on the other. One little known fact is that Tudor was the first to introduce a self-winding chronograph in the 1970s. Rolex’s Daytona only followed suit nearly a decade later in 1989. Owned by the Hans Wilsdorf Foundation, Tudor is a non-profit making organisation that invests all its money back into driving innovation into its timepieces. And that spirit of innovation and pushing boundaries still endures.

Ultimately, as Olson explained, “you can be safe in the knowledge that the service for a Tudor is the same as Rolex – the best in the world. You can also find out from David that the investment potential of Tudor is becoming a blue-blooded sensation in the collector’s fraternity.” 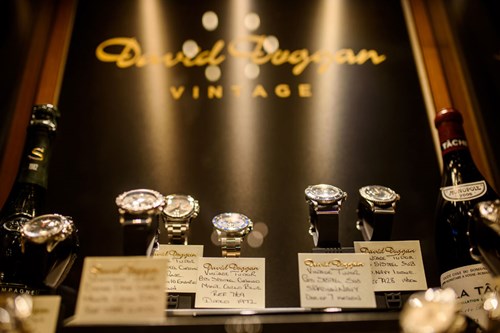 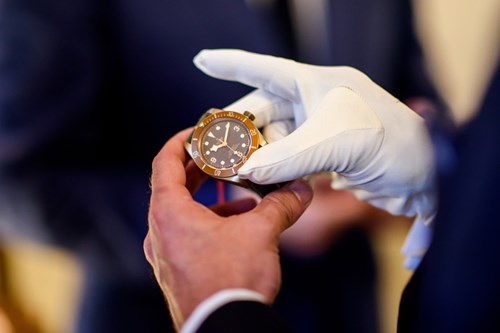 Cabinets of both vintage and new Tudors delight guests

The collection on display featured vintage military submariners, Chronographs with Monte Carlo dials, Prince Oysterdates and Advisors, all accompanied by a select few bottles of fine wine. One particularly special piece was a vintage Tudor military Submariner issued by the South African navy, and of which there are only seven known.

“We like to say that Tudor are the Robin Hood of wristwatches,” David remarked, “they are unbelievable value and quite under-priced when you consider their counterparts. Tudor are a great product to sell. It’s a great feeling when you can sell a watch when you know that the punter is getting a bargain.”

As for their investment potential, David explained that 25 years ago he could purchase one of the watches on display for just £200. Today, those same pieces can sell for £30,000 quite effortlessly. “If you’re thinking of starting a vintage collection, I would start with Tudor now while they are still relatively affordable.”

David also took the opportunity to thank Tudor for its support in helping him to become a Tudor agent, a venture launched almost 18 months ago, following Tudor’s UK relaunch in 2014. Now, David is the only independent watch broker in the UK to sell rare, vintage models like the Monte Carlo chronographs of the 70s, alongside the most current offerings from Baselworld. 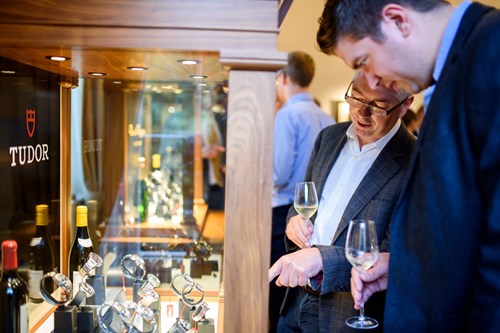 Siblings of Famous Wine Producers get the spotlight

Additional support for this event was provided by Corney & Barrow. Adam Brett-Smith, managing director, sports a Tudor Heritage Black Bay steel, and has been a fan of the brand for some time now.  Pointing to the Tudor on his wrist, he said: “You might think this was given to me to wear for this evening, but it’s not.”

Brett-Smith went on to share some observations on why wine making is a lot like watch making. Depending on the exact wine, the ageing process for a bottle of Châteauneuf du Pape can last between 12 and 24 months. Some estates will keep them for years. Compare that with the painstaking creation of a new Patek Philippe timepiece, which for simple models takes around nine months. More complicated pieces can take upwards of two years. But, as Brett-Smith explained, this was not an evening about celebrating “the cult, the top of the pops, the most expensive, the most glamorous, with layers and layers of production” but instead  a chance to “look fractionally, not even below, but sideways, to see if there is a sister or brother relationship to [a specific] wine estate.”

Flutes of Champagne Delamotte Blanc de Blancs NV kicked off the proceedings. This delicious, medium-bodied dry chardonnay is the sister house of Champagne Salon, arguably one of the greatest champagnes on the market. “As with watches, cars, guns, wine, you have always got the thinking man’s choice, rather than the obvious, heavy-branded one, and that’s what Corney & Barrow are here to help you with this evening,” said Brett-Smith. 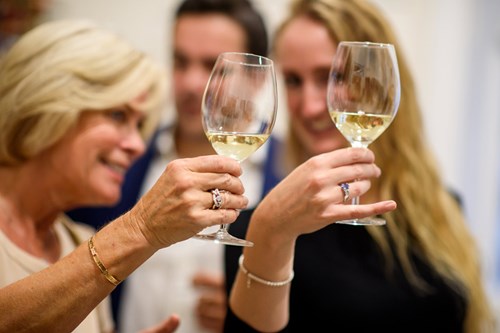 You can see the 2017 Tudor collection by visiting our Burlington Arcade showroom, and if it’s vintage or pre-owned Tudor you are looking for, you can view our collection online. If there is a specific Tudor timepiece you are after, please do not hesitate to get in touch with one of our team.