In Profile: The Rolex Air-King

To understand the Air-King’s roots, it’s necessary to travel back to the 1930s and a golden age of aviation. Pioneers like Charles Douglas Barnard were pushing the limits of long distance flight and Rolex was right in the centre of the action. For instance, in 1933, its Oyster watches were taken along on the Houston Expedition – the first ever flight over Mount Everest at an altitude of more than 10,00 metres (33,000 feet). And a year later, Owen Cathcart-Jones and Ken Waller made a record-breaking return voyage from London, UK to Melbourne, Australia, in their twin-engine De Havilland Comet, using a Rolex Oyster as their on-board chronometer. 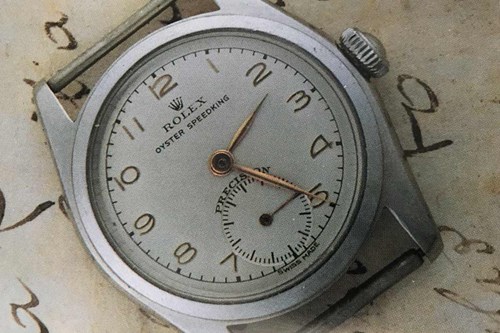 Barnard himself said of the Oyster: “The peculiar qualities of this Rolex watch render it eminently suitable for flying purposes and I propose to use it on all my long-distance flights in the future.”

The flying connection continued into the Second World War, with many British pilots swapping their standard government issue watches for the more accurate Rolex. Indeed, the Battle of Britain was won by pilots wearing ‘boy’s size’ manual wind Oysters with sweep seconds and luminous dials. Using their own money, members of the armed forces bought up every Oyster that they could get their hands on. Rolex later returned the compliment by sending replacement watches to British prisoners of war who wrote to request one – their own having been acquired by their captors.

When founder Hans Wilsdorf learned just how much the pilots’ loved their Rolexes he decided to create a line of manual wind Oyster watches as a tribute to their bravery. And so, the Air-King was born in 1945, joining its cousins the Air-Lion, Air-Tiger and Air-Giant. The Air-King is the only one still in production, despite a brief hiatus – more on this in a moment – making it one of longest continuously produced models in Rolex history. Its vintage references are highly prized amongst collectors.

The Air-King remained enormously popular throughout the 1950s and 1960s and the flying connection stuck, with American airline PanAm handed them out as retirement gifts to its pilots. Rolex also advertised it in New Scientist magazine as the as the perfect watch for someone on with a top secret job and a need for precision timing. 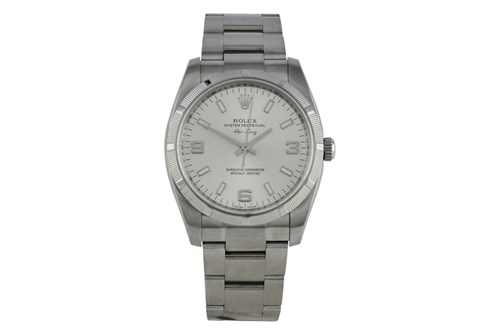 Its continued popularity is helped by its romantic history, but it is also an unashamedly simple watch and for 37 years Rolex left the Air-King 5500 largely untouched. The company did eventually upgrade the model to feature a sapphire crystal and a new calibre 3000 movement when it released the ref. 14000. When the ref. 14010 was introduced, it came with an engine-turned bezel and, then, in 2000, both references were upgraded to the calibre 3130 movement. Another refresh came seven years later, with the introduction of the slightly larger 1142XX. It also featured a thicker case, a concentric dial and new machined Oyster bracelet.

In 2014, it seemed as though the Air-King’s time was up when the Oyster Perpetual – the new entry-level Rolex – was unveiled at Baselworld. But the Air-King still had a trick or two left in the bag and at Baselworld 2016, Rolex unveiled the 40mm reference 116900. It has all the perks you’d expect of a modern watch – a larger 40mm case, the calibre 3131 – which is shares with the Rolex Milgauss – and soft iron inner case to protect it from magnetic fields.  But it also comes with a 1940s military-style dial, a prominent minute scale for navigational time readings and the same lettering that had been designed especially for the model in the 1950s.

What’s more, Rolex added white gold Mercedes hands, rather than the baton hands that had become typical of older Air-Kings, and combined with the minute markers and a luminous triangle at 12, all drawing heavily on its aviation history. Nostalgia is very popular right now amongst the big watch brands and the revitalised Air-King is ruler of them all.

Take a look at our interview with David to find out which new Rolex models caught his eye Rolex at Baselworld 2017. 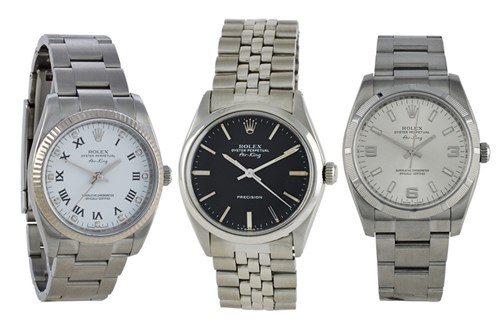 Visit our Rolex page for more information on the Air-Kings and other Rolex models we currently have available. David Duggan is now one of only a handful of authorised Rolex repair centres in the UK, following Rolex-approved upgrades to the workshop.

Get in touch if you are looking to have your Rolex serviced, interested in the latest trends, or looking to buy a vintage piece.