First created in 1904, the Cartier Santos was something of a trailblazer. Also known as the Pilot Watch, Louis Cartier designed the timepiece specifically for his friend, Brazilian aviator Alberto Santos-Dumont. Santos was a pioneer in aviation history, flying his winged aircraft around 200 feet in October 1906. It was a huge accomplishment and Santos became a national hero in his home country.

But this flamboyant pilot had a problem – he needed to keep his hands on the plane controls but found himself distracted every time he had to reach for his pocket watch to check the time. The wristwatch had already been invented by Patek Philippe, but in Santos’s era they were considered ladieswear.

Louis Cartier changed everything. He designed a watch with a square face – quite a departure from the typical circular designs – black leather strap and a small buckle. This was no pocket watch plonked on a strap: this Art Deco timepiece was as functional in form as it was beautiful in design.

Santos wore the watch on every flight and, as his fame grew across Europe, so, too, did curiosity about what was strapped to his wrist. Cartier wasted little time and worked with watch movement maker Edmond Jaeger to mass-produce the design. The first Santos timepiece went on sale in 1911 and quickly became a top seller. It remained a firm favourite even when the military specified round watches for service in the Second World War.

In 1978, the Cartier company introduced the Cartier Santos Galbee XL in stainless steel and gold, complete with crown guards and automatic movement. A completely stainless steel option soon followed and the new design was an instant hit, especially amongst a younger clientele.

In 2004, Cartier marked the centenary of its iconic timepiece with the launch of the Santos 100 –remodelled to follow the fashion for over-sized watches. A few years later, it released a version in a black carbon ADLC (amorphous diamond like carbon) coating. It was discontinued but brought back to life in 2016 as the Cartier Santos 100 XL, complete with sporty textile strap and upgraded movement. 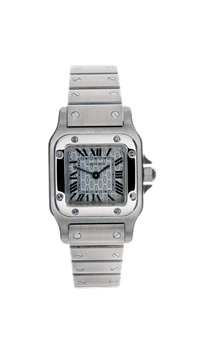 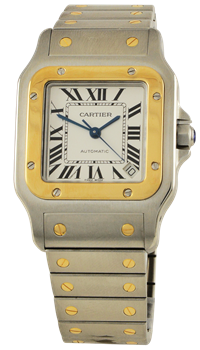 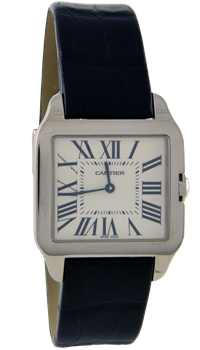 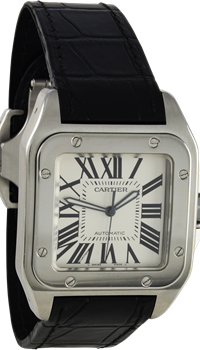 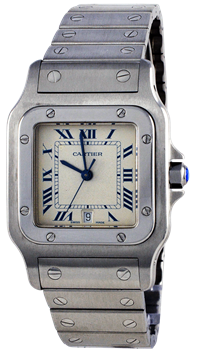 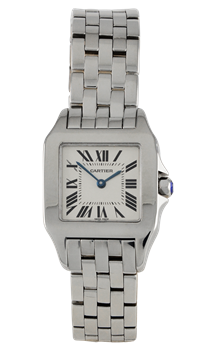 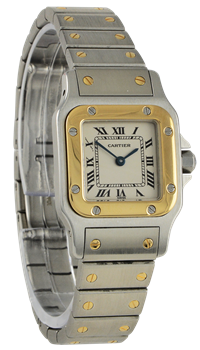 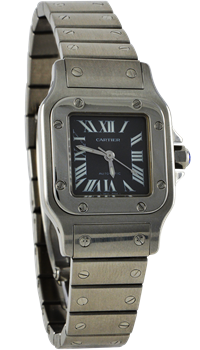