Introduced in 2007, the Ballon Bleu is one of Cartier’s younger models. It is also a contemporary, unisex watch with a unique aesthetic. While it retains the blue sword-shaped hands and oversized roman numerals featured in other Cartier models, the Ballon Bleu’s rounded, curvy shape, with large, domed crystal distinguish it from any of its predecessors.

Maison de Cartier first announced the launch, declaring it "a watch from another world, formed of beautiful curves… a meteorite fallen from the sky” and there is certainly something other-worldly about it.

Perhaps its most distinguishing feature is the blue sapphire cabochon crown – the ‘blue balloon’ – and its unconventional setting: the sapphire sits within a small, metal, fluted case giving the illusion that it is floating within the arch.

Cartier integrated the crown seamlessly into the entire precious metal casing, in a way that had not been done quite so delicately before. The timepiece manages to appeal to both sexes, thanks to its pebble-like appearance, evoking a confident, bold masculinity in its largest 46mm form, and Cartier’s signature blue hands, gemstone crown and curves which all hint at femininity. No wonder, then, that it has become one of Cartier’s popular models, rivalling both the Tank and the Santos for iconic status.

The guilloche dial, while simple, is perfectly balanced, with little to distract from the overall look.  Even the date aperture sits neatly where the three o’clock mark would be, as the minute markers accommodate for the window by gently curving around it, mimicking the way the case softly moulds around the crown with a metal arch.

The Ballon Bleu is a modern-day example of the way in which the Parisian jeweller creates watches with elegant timelessness. King Edward VII called Cartier “the jeweller of kings and the king of jewellers” issuing it a Royal warrant in 1904. More than a century on, the jeweller remains a royal favourite, with the Duchess of Cambridge often seen sporting her Ballon Bleu.

Produced in both quartz and mechanical form, the Ballon Bleu is currently available in five different metals and has been through several different iterations since its launch, from 28mm to 46mm in gentleman and ladies’ sizes, but it has never deviated very far from its original design. 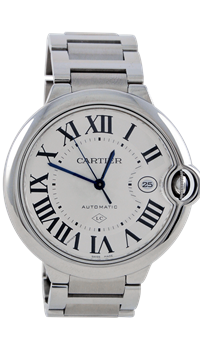 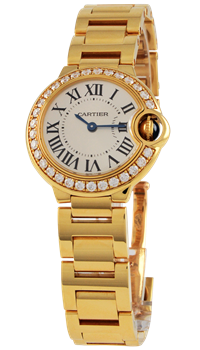 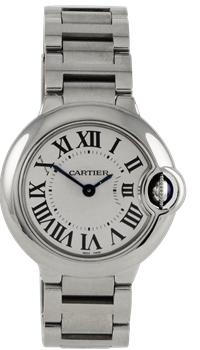